Paceman Chanaka Welegedara took two wickets with the second new ball, including that of centurion Younis Khan, to give Sri Lanka the edge in the third Test against Pakistan at Sharjah stadium. 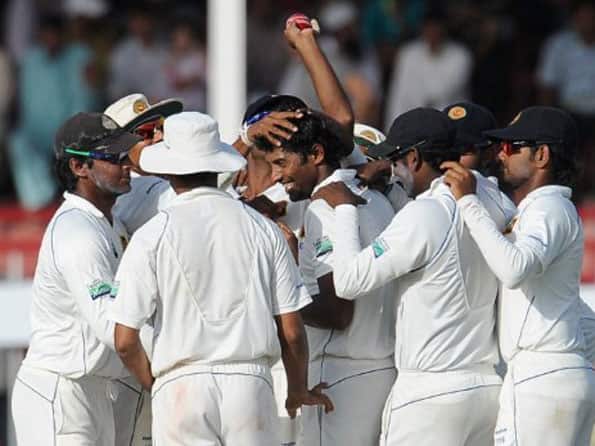 Paceman Chanaka Welegedara took two wickets with the second new ball, including that of centurion Younis Khan, to give Sri Lanka the edge in the third Test against Pakistan at Sharjah stadium.

The 30-year-old left-arm paceman dismissed Younis (100) with the first delivery of the second new-ball and then had Asad Shafiq (16) in the same spell to leave Pakistan at 282-6 at the close on the third day.

Sri Lanka, who scored 413 in their first innings, still lead by 131 runs and are seeking a big first innings lead to give them a chance of levelling the series after losing the second Test by nine wickets in Dubai.

The first Test in Abu Dhabi ended in a draw.

At close, skipper Misbah-ul Haq, who reached his 13th half-century in the penultimate over, was unbeaten on 50 and with him Abdul Rehman on three not out.

The first two sessions had belonged to Pakistan as Younis added 98 for the third wicket with Azhar Ali (53) and another 100 with Misbah for the fourth wicket but Welegedara s double strike slumped Pakistan from 233-3 to 258-5.

Younis had completed his 18th Test hundred with a sharp single off Welegedara in the last over before tea, taking 188 balls studded with eleven boundaries and a six.

Misbah was mostly blocking before hitting the 53rd delivery he faced for his first boundary, ensuring Pakistan didn t lose sight of winning 2-0 if they want to replace Sri Lanka at number five and jump one place up the current test rankings.

After tea, both the batsmen upped the tempo as Younis hit a boundary and six off Herath to take Pakistan past the follow-on mark of 213, before notching another four off a reverse sweep as Sri Lanka delayed the second new ball until the 91st over.

The new ball was effective as Welegedara struck with the first delivery, bowling Younis with a sharp incoming delivery. Younis hit 12 boundaries and two sixes during his 211-ball knock.

Welegedara, who finished with 3-62 off 25 overs, then had Shafiq caught behind.

Earlier in the morning, Sri Lanka were a bowler short after frontline paceman Dhammika Prasad injured a muscle and was unable to bowl after Pakistan resumed at 35-2.

That helped Ali, who scored his maiden hundred in the last match in Dubai, and Younis to bat out the first session taking Pakistan to 126-2 by lunch.

Younis, on 30, survived a close leg-before shout against Herath who extracted some spin out of an otherwise batting-friendly pitch.

Ali reached his 11th Test fifty soon after lunch but was bowled by medium pacer Kosala Kulasekara s delivery in the sixth over after lunch, for the debutant s first Test wicket. (AFP)