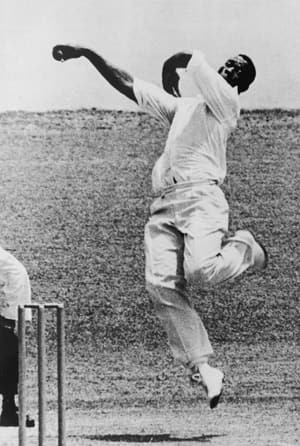 Wes Hall, a charismatic figure on and off the field, took 192 wickets in 48 Tests during an 11-year test cricket career that has earned him a place in the West Indies Cricket Hall of Fame Getty Images

The government announced on Saturday said that the 74-year-old, who went on to head the West Indies Cricket Board and also become a colourful figure and speaker in public service, in government, business and religion, would be made a Knight Bachelor (KB) for his “contribution to sport and the community”, reports Caribbean Media Corporation (CMC).

Hall, a charismatic figure on and off the field, took 192 wickets in 48 Tests during an 11-year test cricket career that has earned him a place in the West Indies Cricket Hall of Fame as the first West Indian to take a hat-trick in a Test match, a feat he achieved in India in his first match in 1958.

He went on to take 30 wickets in the five-match series and become a permanent fixture in the star-studded West Indies side that included the incomparable Garry Sobers, Conrad Hunte and Rohan Kanhai.

Sobers and Hunte also went on to receive Knighthoods.

Hall was one of the heroes of the historic first tied Test against Australia at Brisbane in 1960, claiming match figures of nine for 203 and bowling the dramatic final over as West Indies claimed three wickets to earn the first tie in 84 years of Test cricket.

A tall, muscular bowler, Hall and fellow Barbadian Charlie Griffith became one of the most fearsome pairs in cricket, strike bowlers who presaged the quartet of West Indian pacers that would come to dominate the game decades later.

But in what was later described as his “finest hour”, Sir Wesley bowled without a break for more than three hours against England in the summer of 1963, on the final day of the second Test at Lord’s to draw the match.

He grabbed 16 wickets in the series and in tandem with Griffith who grabbed 32, propelled West Indies to a 3-1victory in the five-match series.

Six years later, his body exhausted by the wear and tear of bowling at speed, he played his 48th and final Test match in 1969, taking only one wicket against New Zealand before leaving the field with an injury.

His playing days over, Sir Wesley began a new life in public service in business and government with new careers in industrial and public relations, politics and religion that drew on a talent for colourful and humorous public speaking.

In the private sector, he worked for Cable and Wireless, Banks Barbados Breweries and Sandals Resorts in Barbados and Trinidad’s West Indies Tobacco Company (WITCO).

But entering Barbadian politics as a senator for the Democratic Labour Party, he won election to a parliamentary seat in 1986, and re-elected in 1991.

As the minister for tourism and sports in the Erskine Sandiford administration, he has been credited for developing the sports tourism industry in Barbados.

He then became an ordained minister in the Pentecostal Church in 1990.

A popular speaker at public and private functions, he has also served West Indies cricket as administrator,from selector to team manager and ultimately West Indies Cricket Board (WICB) president from 2001 to 2003.

Sir Wesley now adds a knighthood to an honorary doctor from the University of the West Indies (UWI) and a lifetime achievement award from the Caribbean Tourism Organisation (CTO).

At the storied Kensington Oval in Bridgetown, a grandstand bears his name along with bowling partner Griffith –the Hall and Griffith stand.