Sandeep Warrier and Krishnappa Gowtham shared five wickets them but West Indies A still managed to extend their lead to 235.

India A pacer Sandeep Warrier and spinner Krishnappa Gowtham shared five wickets between them but West Indies A still managed to extend their lead to 235 on the third day of the second unofficial Test in Port of Spain on Friday.

West Indies A had started the day at 12 for four in their second innings, but overnight batsmen Sunil Ambris (48 batting) and Jermaine Blackwood (30) ensured that they cross the three-figure mark, as the hosts took lunch at 107 for seven.

Giving Ambris company at the break was Rakheem Cornwall (6).

On Thursday, India A’s first innings folded for 190, a total they owed to Dube (79 off 85) and opener Priyank Panchal (58 off 125). They shared a 124-run stand for the sixth wicket after the batting collapse.

Pacer Chemar Holder was the standout bowler for the hosts, taking five wickets for 54 runs in 12.5 overs and helping his team gain a healthy 128-run lead. However, West Indies squandered the advantage by losing their four wickets for 12 runs in the second innings.

India A lead the three-match series 1-0.

Test specialists Hanuma Vihari and Mayank Agarwal were dismissed cheaply, leaving India A tottering at 11 for four in the first hour after West Indies A scored 318.

Agarwal (4), who wanted some game time before the Test series got a beauty from new ball bowler Holder, who bowled at a brisk pace and also extracted disconcerting bounce.

Skipper Vihari (0) also didn’t trouble the scorer as Holder got one to nip back in and the ball also kept a bit low, trapping him plumb in-font.

This was after West Indies A, starting the day at 243 for five, could add another 75 runs before lunch with Rahkeem Cornwall (56 no off 70 balls) scoring the bulk of the runs.

Leg-spinner Mayank Markande got three wickets and so did pacer Mohammed Siraj. 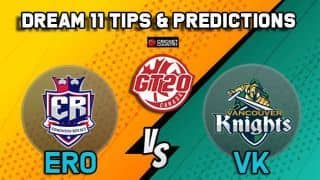