The West Indies selectors have called up three cricketers to join the team for the two-match Twenty20 series against New Zealand.

Coach Ottis Gibson said that leg-spinner Samuel Badree, all-rounder Andre Russell and wicketkeeper-batsman Andre Fletcher are on their way from the Caribbean to join their teammates.

“There are three guys coming in for the T20s. Samuel Badree, Andre Russell, and Andre Fletcher are on their way. We are down to the bare-bones and we’ll have to look at integrating them into this mix-up and see how we go forward from here. They should be here in two days’ time,” he said.

The West Indies lost the fourth One-Day International (ODI) by 58 runs under the Duckworth-Lewis method to give New Zealand a 2-1 lead in the five-match series Saturday. They were 134/5 in the 34th over in reply to the hosts’ 285/6 off their 50 overs.

The visitors are down to 12 fit players after seamer Ravi Rampaul injured his finger in the nets Friday. This followed injuries to Marlon Samuels and Darren Sammy and the withdrawal of Darren Bravo due to personal reasons.

“It’s Ravi’s left hand so it would not affect his bowling that much,” said Gibson, adding that the team management is awaiting the results on Sammy.

“We are still waiting for the results on Darren Sammy. At the moment he’s still limping around a bit so we’re not sure how he’s going to travel but he’s staying here with us a little longer. At the moment he is on the injured list.”

The fifth and final ODI will be played in Hamilton Wednesday followed by the two T20Is Jan 11 (Auckland) and 15 (Wellington). 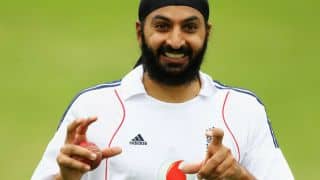