West Indies coach Ottis Gibson has blamed the side’s batsmen for their 186-run defeat to New Zealand in the first Test match which ended in Kingston on Wednesday.

Gibson has blasted the side’s batting in the two innings as “bitterly disappointing” after they scored 262 and 216 with only two top-order batsmen making fifties, reports CMC. “Obviously, [I’m] very disappointed with the way we batted especially. By all accounts, after the first day’s play, we agreed in the dressing room that it was a flat pitch, so to have a batting performance like that over two innings is bitterly disappointing and something that we need to put right as quickly as possible,” said Gibson.

New Zealand crushed West Indies inside four days at Sabina Park to claim only their second ever win in the Caribbean. The tourists have now taken a one-nil lead in the three-Test series. “They have just got to occupy the crease and look at New Zealand, the way they went about it – making runs, starts, getting yourself in first, assessing the conditions, assessing the bowlers, scoring areas. We had five batsmen over two innings in our top six who made ducks and that puts your batting under pressure,” said Gibson.

The Caribbean side collapsed in less than a session and a half attempting to chase 403 victory target. “First-innings runs have always been important. Any team that’s going to win Test matches needs big first-innings runs. New Zealand showed that in the first innings, getting 500, and we didn’t really respond,” he said.

“We needed to respond with a 450 or 500 score and take some more time and overs out of the game. We didn’t do that. To get bowled out on that pitch in the second innings in 48 overs is very, very disappointing.” However, Gibson said he was pleased with the efforts of his front-line bowlers, who had all come into the match after significant time away from international cricket.

Jerome Taylor and Kemar Roach were battling injuries, while Shane Shillingford played his first Test since his suspension due to an illegal bowling action. Taylor was the best bowler on Wednesday with three for 28 while fellow new ball partner Roach finished with two for 12 and Shillingford 2 for 39.

“Taylor swung the new ball nicely and when he came back with the old ball, he was skillful and picked up wickets. Hopefully, he’ll be fit and get through this Test series and, going forward, make us a stronger unit by leading the bowling attack.” The second Test between the two sides starts Monday in Port-of-Spain. 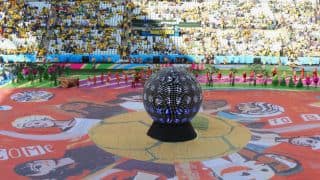