Andre Russell is in scintillating form for KKR in ongoing IPL 2018.

Riding on good form in the ongoing VIVO Indian Premier League (IPL) 2018, Andre Russell has been called by the West Indies Cricket Board (WICB). West Indies are due to play a fundraiser Twenty20 International match against Rest of the World at Lord s on May 31. Russell last played for West Indies in 2016, before being handed a one-year ban for doping.

Apart from Russell, Ashley Nurse is also making a comeback to the 13-man squad. Jason Mohammed has been dropped after he led West Indies to a 3-0 T20 series loss against Pakistan at Karachi.

According to cricbuzz, Chairman of selectors, Courtney Brown said: We welcome the return of the players who missed the Pakistan series and are delighted to recall Andre Russell to the squad, as we believe he will have a key role in our white-ball cricket. Denesh Ramdin and Keemo Paul keep their places after encouraging performances at both regional and international level.”

The charity match will be recognised as an official T20I game. The proceedings will go to rebuilding of James Ronald Webster Park in Anguilla and Dominica’s Windsor Park Stadium – grounds.

Eoin Morgan will be leading the ROW side. 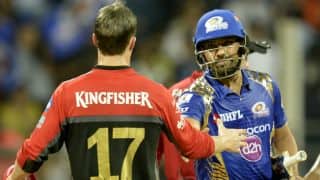 IPL 2018: RCB vs MI, Match 14, Know How, When and Where to Watch Cricket Score & Latest Updates Online