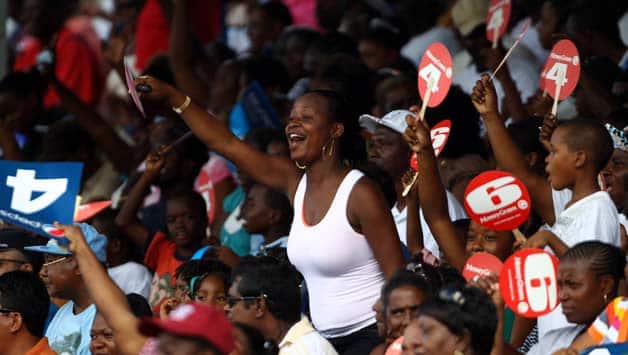 Fans were turned away on certain nights at the Queen’s Park oval in Trinidad and at the Beausejour Cricket Ground in St. Lucia where the matches were played, reports CMC.

“There can be no doubt about the growing strength of West Indian cricket,” declared Hunte.

“The interest has been revived, the passion has resuscitated and we must capitalise on this, as we continue to build and strengthen West Indies cricket.”

The carnival-like atmosphere which prevailed during Sunday’s finals included 300 Trinidadians who flew into to Castries on a chartered flight.

“We are heartened to see fans travelling in such large numbers to support their team,” he said.

“Indeed I cannot recall, in all my years of being involved in West Indies cricket, having been witness to such large numbers of supporters travelling from their homeland to support their team in regional cricket.”

Defending champions Trinidad and Tobago subdued Guyana in Sunday’s final to complete a hat-trick of CT20 titles and secured their place for a third time in the Champions league T20.

The CT20 itself was played for the last time and will be replaced next year by the Caribbean Premier League, a franchise-based tournament.

“As a citizen of St. Lucia, I am proud to have seen the thousands of my countrymen and women who turned out in their larger numbers, especially on the Friday, Saturday and Sunday nights,” said Hunte.

“We regret that on the night of the Grand Final, so many persons turned up to the Beausejour Cricket Ground, but could not get in as tickets were sold out.”