West Indies grabbed the wicket of David Warner just before lunch to finish off a good morning for them here at Windsor Park on Wednesday on the third day of the third and final Test between West Indies and Australia. 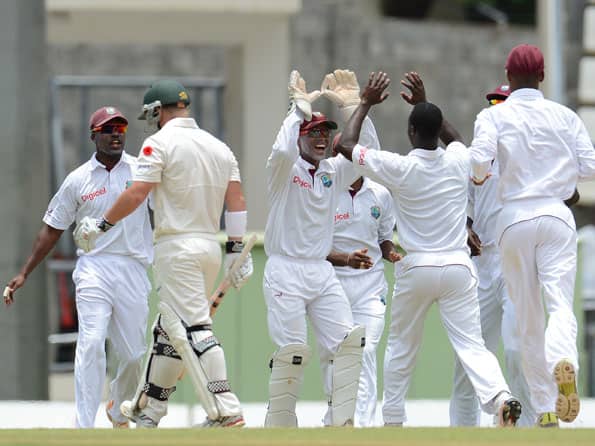 West Indies grabbed the wicket of David Warner just before lunch to finish off a good morning for them here at Windsor Park on Wednesday on the third day of the third and final Test between West Indies and Australia.

The tourists hold a lead of 128 runs over the hosts after they had earlier bowled the West Indies out for 218 in their first innings – a typically stubborn innings of 68 by veteran Shivnarine Chanderpaul limiting the damage.

However, the Australians are in a strong position as they only need a draw to take the series having won the opening Test.

West Indies had been 165 for eight overnight with Chanderpaul and Ravi Rampaul having already put on 45 for ninth wicket.

They took their partnership to 66 before Nathan Lyon broke through. Rampaul came down the wicket but got a thick outside edge and the ball flew up to Warner at point.

The visitors took the new ball after 83.1 overs and in the end it was Chanderpaul that fell.

Mitchell Starc was bringing the ball back in off the seam and one finally got past the obstinate West Indian’s bat and struck him on the pad and he was judged lbw.

Chanderpaul had faced 164 balls for his 68 as he once again top scored.

He is also the highest scorer in the series with 277 runs at an average of 92.33. He has managed to face up to the Australian’s bowling for more than twice as many balls as any of his team mates.

Kemar Roach played his part too. He provided stubborn resistance to frustrate the Australians and ended up not out having played his third longest Test innings in facing 65 balls for his nine runs.

It left Australia to face a tricky five overs before lunch and the West Indies got the breakthrough that they would have wanted.

Warner had already struck Rampaul for two boundaries. However, in the last over before the interval he drove loosely at a Roach delivery and edged to the only fielder in the slip cordon, Chanderpaul.

The next ball almost brought a second wicket. Shane Watson played the delivery out towards mid-wicket and non-striker Ed Cowan anticipated a single.

Watson didn’t move from his crease and Cowan had to scamper back. A direct hit might have caught him short of the mark but he survived. (AFP)

IPL2012: RCB-CSK match called off due to heavy rains

Australia in control against West Indies on day three