The West Indies joined millions of South Africans in Johannesburg in marking the first anniversary of the death former President and global icon Nelson Mandela. The Caribbean side paused from their preparation for the upcoming three-Test series to be part of a brief ceremony held by the Guateng Cricket Association at the Wanderers Cricket Stadium on Friday, reports CMC.

All across the country, South Africans paused for three minutes of silence for the legendary anti-apartheid freedom fighter, who said “sports has the power to unite the world and speaks a universal language”. West Indies fast bowling legend Curtly Ambrose was given the honour of ringing the bell during the tribute to Mandela, who spent 27 years in prison before his release in 1990.

Mandela attended several international cricket matches when the West Indies toured South Africa, and also visited the Caribbean in 2003 as part of his country’s bid to host the 2010 FIFA World Cup. Mandela was a huge sports fan and his support of rugby, cricket and football are well documented. He died Dec 5 last year at age 95.

Following the ceremony, the West Indies held their second training session of their ongoing camp. The West Indies will face the Proteas in the first Test starting at SuperSports Park in Centurion Dec 17. 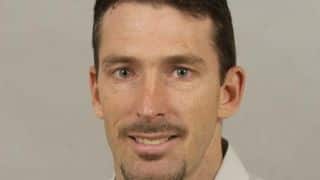