Australia lost both their openers in the opening session of the second Test against West Indies at Queen's Park Oval on Sunday before reaching lunch on 74 for two. 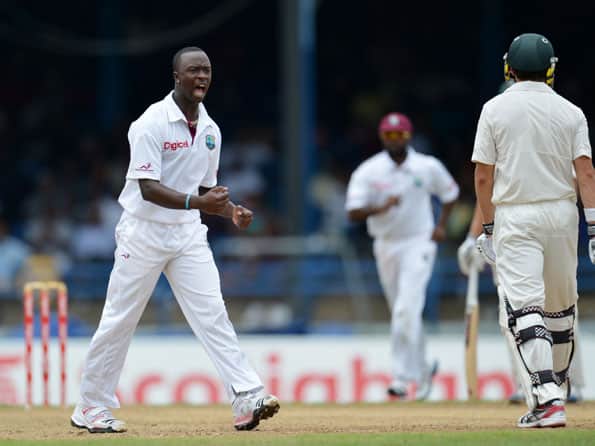 Australia lost both their openers in the opening session of the second Test against West Indies at Queen’s Park Oval on Sunday before reaching lunch on 74 for two.

Shane Watson was not out on 10, while Ricky Ponting was on five.

Openers David Warner (29) and Ed Cowan (28) had put on 53 for the first wicket as Australia, who won the toss and chose to bat, made a steady start in their bid to wrap up the series after winning the first Test by three wickets in Barbados.

The Test started in dramatic fashion when Warner was given out by umpire Marais Erasmus from the sixth ball of the opening over bowled by Fidel Edwards.

The ball had come off the pad and bounced in front of wicket-keeper Carlton Baugh but Erasmus’s finger was still raised before West Indies skipper Darren Sammy immediately indicated that the ball hadn’t carried.

However, had Erasmus’s decision been made for an lbw appeal, rather than a catch, then Warner would have been on his way.

There had been much talk about the wicket leading up to the Test with the likelihood that it would take spin.

The thinking of both teams was confirmed when Australia decided to play two spinners for the first time in nearly four years with Michael Beer coming in to partner Nathan Lyon.

The West Indies brought in off-spinner Shane Shillingford for Devendra Bishoo who had disappointed in Barbados.

He bowled the first over of spin in the match in the 15th over and had immediate success.

Warner didn’t quite get to the pitch of his fifth ball but continued through with a drive with the ball coming off the outside edge straight to Sammy at slip.

Shillingford, back in the team after undergoing remedial work on his action, continued to bowl a tight spell only conceding six runs from his four overs as he found some slow turn from the pitch.

Kemar Roach, who had opened the bowling from the Media Centre End, was brought back by Sammy at the Brian Lara Pavilion End for a couple of overs before lunch.

The third ball of his new spell hit Cowan low on the front pad and, again, Erasmus gave the decision against the batsman.

After consulting with Watson, Cowan decided to use the review. The replays showed that the ball had hit him marginally outside the line of the off stump but not enough to change the verdict.

Australia had lost both their openers with the score on 65.

The West Indies had been forced to make one other change to their side with Kirk Edwards left out with an injury to his left knee to be replaced by Kieran Powell.

Two of Australia’s pace attack pulled up sore after their efforts in Bridgetown.

Both Ryan Harris and Peter Siddle were rested with James Pattinson coming into the side as well as Beer. (AFP)

Gerald Majola was under investigation before Nicholson inquiry