The high level task force investigating the ill-fated recent tour of India has said the West Indies Cricket Board (WICB), the West Indies’ Players Union (WIPA) and the national team players were all at fault for the controversy. In its report submitted to the WICB this weekend, the task force said the while the board and WIPA had “erred significantly” in their administration of the new Memorandum of Understanding (MOU), the players also needed to shoulder a “significant proportion of the blame” for the abandoned tour, reports CMC.

The task force, headed by attorney Michael Gordon included ex-WICB president Wesley Hall and prominent Barbadian attorney Richard Cheltenham, also laid out eight recommendations aimed at preventing a repeat of the debacle. This follows a month-long investigation of the crisis which stemmed from the one-day team’s decision to walk off the tour of India midway in the series, in a contracts dispute with WIPA and the WICB.

West Indies players on tour contended the new MOU would have resulted in a reduction of up to 70 per cent of their earnings and asked for the agreement to be revised. When this did not occur, they quit the tour following the fourth One-Day International (ODI) in Dharamsala, putting paid to the fifth ODI, the one-off Twenty20 International and the scheduled three-Test series.

The task force concluded there was “something fundamentally wrong” with players arriving in India to discover the terms of their employment had undergone “radical change”, and also said “very real questions” existed as to whether the MOU was indeed a contract.

“Both Michael Muirhead and Dave Cameron, CEO and president, respectively of the Board, took the view that it was an enforceable contract. Wavell Hinds (WIPA president) on the other hand was equally firmly of the view that the September MOU was not in and of itself a contract but rather an agreed understanding that would lead to a collective bargaining agreement in much the same way as the prior MOU/CBA arrangement had worked,” the task force said.

“This was fundamental. It is a trite law that if two parties to a negotiation do not agree on the effect of a document coming out of these negotiations then there is no meeting of the minds and hence no enforceable contract.

“The Board and WIPA were attempting a sea-change in the financial arrangements for West Indian professional cricketers without ensuring that there was understanding and acceptance by the WICB’s employees, the touring cricketers.”

The report added: “Having said the above, we are of the view that whilst WICB and WIPA can neither be accused of bad faith, they both erred significantly in failing to ensure that their vision for the future of the West Indies Cricket with its ramifications for the sharing of sponsorship money and the concomitant changes in the level of remuneration for both the senior cricketers and the new class of professional players was clearly understood and the vision shared.”

The task force also contended that the players, especially the senior players on tour, also played a key role in the abandonment. According to the report, ODI captain and players representative Dwayne Bravo, said the squad had been aware of the imminent arrival in India of a joint WICB/WIPA delegation.

This, the task force said, led them to believe there were other factors influencing the decision to abandon the tour, though none were found.

“A significant proportion of the blame for the termination of the tour must also lie with the players, and in particular their leaders. The tour was called off when the players refused to play the 5th ODI Oct 17. At that time according to Mr Bravo the players knew that Mr Cameron, and Mr Hinds were due to come to India to meet with them on the Oct 21 some [four] days later,” the report said.

“Their anxiety to bring the tour to a premature end without waiting the additional [four] days certainly suggested to the Task Force that, to use a West Indian phrase, ‘there was more in the mortar than the pestle’. There was, however, no information on what the ‘more’ was, but that it existed, the Task Force felt certain.”

It added: “Senior players in any overseas squad bear a great responsibility to set standards and create examples for the more junior players to follow. This, the Task Force felt, the senior players failed to do.”

The task force was set up by the WICB to investigate the controversy, which among other things led the Indian cricket board to slap a $42 million claim on the WICB for losses incurred because of the unplayed matches.

St Vincent and the Grenadines Prime Minister Raph Gonsalves subsequently intervened in the impasse between the WICB, WIPA and the players, eventually brokering a resolution which led to a full strength side selected for the ongoing tour of South Africa.

The WICB said it was studying the report and would make an announcement in due course. 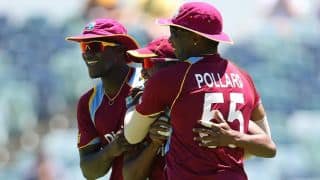