West Indies' destructive opener Chris Gayle said while he wished a great farewell for legendary batsman Sachin Tendulkar, his side will be out there to "spoil the fun and parade" when they take on India in the two-Test series next month. 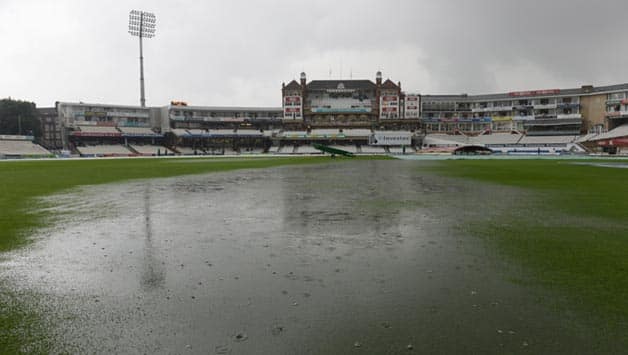 The West Indies team could not undergo training at the JU Campus at Salt Lake, the venue of their three-day practice game against Uttar Pradesh starting October 31, due to wet ground conditions.

The visiting players, however, did some net practice later at the nearby Sourav Ganguly‘s Academy.

“It’s really frustrating to see both the outfield and the wickets in wet condition. We spoke to the authorities and hope it improves tomorrow,” the West Indies operations manager Richie Richardson said.

The practice match, which was originally scheduled in Cuttack, was shifted to Kolkata because of heavy rains in the Odisha town but there was no respite here as well as Saturday’s record showers had left both Eden Gardens and JU Campus ground waterlogged.

While the Ranji Trophy Group B match between Bengal and Baroda at Eden Gardens was called off on the third day today without a ball being bowled, while the Windies were deprived of a practice at the JU Campus ground.

Even as the condition looked grim, the Cricket Association of Bengal is hopeful that the practice match would not be affected.

“We have two days’ time, hope it gets better. There were some damp patches so we could not take the risk,” CAB curator Prabir Mukherjee said.

Richardson, alongwith coach Ottis Gibson, had a look of the ground but as the condition seemed unplayable, their practice session was shifted to Sourav Ganguly’s Academy (the Videocon School of Cricket) in Salt Lake at the last minute.

Explosive West Indies all-rounder Chris Gayle was the cynosure of all eyes as local crowd gathered outside the gate to take a glimpse of the visiting players. The Windies players batted at the three nets as some local bowlers helped them in their first practice session after landing in India.

The opening Test of the two-match series will be held at the Eden Gardens from November 6-10. The visiting team will also play a three-match ODI series.

Meanwhile, a 15-member UP side led by Piyush Chawla arrived in Kolkata for the match. Former India players Mohammad Kaif and RP Singh are also in the side.

Sachin Tendulkar retirement: He will have to earn each run in Test series against West Indies, says Richie Richardson