WINDIES Men will be in India for almost seven weeks starting September 26. They will compete against India in 2 Tests, 5 ODIs and 3 T20s, a press release from West Indies Cricket Board stated.

Jason Holder will lead the Test side with the board announcing a 15-member squad for the Tests.

As the team embarks on a tough tour of India the successes against Sri Lanka and Bangladesh should hold them in good stead during the India series. The panel welcomes back Sunil Ambris who missed the last couple of series due to injury, along with Jomel Warrican who adds a second spin bowling option to the attack, said Chairman of Selectors, Courtney Browne.

India will have roughly a week to prepare for the tour with the 2018 Asia Cup, starting on September 15, scheduled to end on September 28.

The tour begins with the first Test at Rajkot on October 4 followed by the second Test at Hyderabad starting October 12. The ODI leg will begin at Guwahati with matches scheduled for Indore, Pune, Mumbai and Trivandrum.

The three T20Is will be played in Kolkata, Kanpur/Lucknow and Chennai.

West Indies will be flying to Bangladesh after the series while India s next assignment will be the tour of Australia starting November 21.

The schedule for the tour: 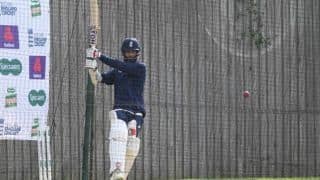