Wickets bring hosts back into the contest

The ball didn’t have much swing in the manner of the first morning, yet Jerome Taylor breached the defences of Australian batsmen, and his counterparts Jason Holder and Kemar Roach took the cue to allow their unit to chip away at their opponents. At lunch on the second day, they have reduced Australia to .. for 8 as Taylor took .. wickets and registered his second best bowling figures. LIVE BLOG: West Indies vs Australia, 2nd Test, 2nd Day, Kingston

But they haven’t been able to unsettle the equilibrium of Steven Smith. Despite wickets falling around him, Smith looked quite comfortable at the crease and played according to the merits of the ball, punishing the odd occasional bowling lapse. He is unbeaten on 175, his second highest Test score, and looks likely to remain unbeaten at the end of the innings, a la Adam Voges of Dominica. LIVE SCORECARD: West Indies vs Australia, 2nd Test, 2nd Day, Kingston

It has been a prolific two-year period for him. He has now scored 2089 runs at 65.28 in this period, but in the 12 months, he averages 105.63. All of his nine centuries, and seven of his 10 half-centuries come in this period. There is evidence of his growth as a batsman – an explanation – he can adjust to all sorts of tracks, spinning ones, tacky ones, featherbed ones and of course, bouncy ones.

He was unbeaten on 135 when Australia started the morning session at 258 for 4. They lost Shane Watson via a straight delivery on off stump that Watson shouldered arms to: the ball went on to hit the off stump. Brad Haddin, after a cavalier few minutes at the crease, hitting three fours and a six in his 23-ball 22, succumbed to an inswinging delivery that went past his defence and hit the middle stump. Mitchell Johnson provided Roach his first wicket, slashing a ball wide of off stump and edging through to the slips.

Starc was worked out by Holder, with many deliveries from an around-the-wicket-angle seeping doubts in his mind to make him misjudge the line of a similar one, which went past him to hit the off stump. West Indies would have had their ninth wicket in Josh Hazlewood, but Denesh Ramdin missed a stumping to give him a life. He has stuck with Smith so far for a small but useful stand. 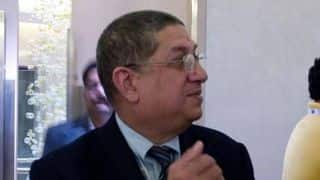