Benn, who last played a Test in December 2010, was recalled to reinforce the West Indies’ spin department.

West Indies bowler Sulieman Benn says he has been improving as a spinner since his return to the Test side after a gap of four years. The left-arm orthodox spinner grabbed 5/39 to help bowl out Bangladesh for 182 in their first innings of the first Test against the West Indies, reports CMC.

Benn, who last played a Test in December 2010, was recalled to reinforce the West Indies’ spin department. “I am enjoying my bowling and when I first got back in against New Zealand, I did not bowl too well. As that series progressed I got better and better and at this moment I am finding my way nicely,” said Benn, whose five-wicket haul helped West Indies into a commanding position against Bangladesh at Arnos Vale.

The Barbadian spinner revealed that extra pace on his deliveries worked in his favour. “The pitch was slow and the difference between the Bangladesh bowlers and myself was that they bowled too slow. I normally bowl quick for a spinner, so was able to put some pace on the ball and this added to the problems for their batsmen,” said Benn.

The West Indies defeated Bangladesh by 10 wickets Tuesday and both sides meet in the second Test which starts Saturday at the Beausejour Stadium in St. Lucia.

“My job is to take wickets and I am going to just continue keeping it basic and hopefully the wickets will continue to some. We want to win this series and even if the wickets don’t fall at my end, once I can keep up the pressure and they fall at the other end, I am happy as well,” said Benn. 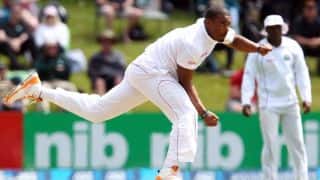