Trott was given a vote of confidence by England coach Peter Moores after his failures.

St. George’s (Grenada): England bowling legend Sir Ian Botham said batsman Jonathan Trott should be left out by England for the second Test against the West Indies starting on Tuesday.

Trott suffered a miserable return to Test cricket as he was dismissed for four runs in his two innings as an opener in the drawn first Test in Antigua.

Botham insisted English county side Yorkshire opener Adam Lyth should be handed his debut in place of Trott on Tuesday.

“I don’t see the point in playing Trott at the moment. I’d look to give Adam Lyth a go. Lyth has consistently scored runs over the last few years so I’d say he deserves his chance,” Botham was quoted as saying by skysports.com on Monday.

But 33-year-old Trott was given a vote of confidence by England coach Peter Moores after his failures when he said the Warwickshire batsman had “earned his chance” to return to the Test line-up.

Left-handed batsman Lyth enjoyed a prolific season for Yorkshire last year, scoring 1,487 runs at an average of 67 and earned the Professional Cricketers’ Association (PCA) and Cricket Writers’ Player of the Year awards as Yorkshire lifted the County Championship title. 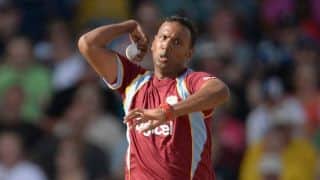