I m very happy to be back in the West Indies camp, he said.

His rich vein of form ensures the return of Boshoo in the West Indies‘ 14-man squad to face England in the first Test starting here Monday. Bishoo last played Tests three years ago.

Bishoo, one of the leading bowlers in the recently-concluded West Indies Cricket Board‘s (WICB) Professional Cricket League (PCL), also enjoyed a six wicket haul as a member of the West Indies training squad preparing to play against England, reports CMC.

Over the years I was struggling a little bit and but I started feeling more confident. I was feeling good. I was working hard. At the end of the day hard work always pays off, said Bishoo on Friday.

I made one or two adjustments with my bowling action and stuff like that. I am more comfortable now. Everything is going well and I am so happy. I think I am smarter when it comes to bowling and I am pretty confident in whatever I am doing. This is my best first class season .

Bishoo made his debut for the West Indies in 2011 and was that year named the International Crickt Council‘s (ICC) Emerging Cricketer of the Year. He played 11 Test matches but lost his place in 2012.

I m very happy to be back in the West Indies camp, he said.

I was out of the team but I knew I was good enough to make my way back into the team. I made some changes to my action and now I would say I m bowling the best I have ever bowled.

The three Test matches will be played at Sir Vivian Richards Stadium in Antigua; Grenada National Stadium; and Kensington Oval in Barbados.

The West Indies will continue their preparation for the series with training sessions on Saturday and Sunday at the Sir Vivian Richards Cricket Ground. 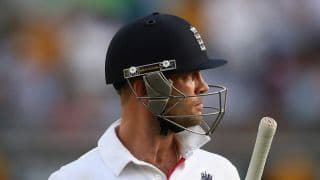