West Indies will face off against England in the first Test of the series at Antigua from April 13, 2015. The Caribbean side has been in a prolonged rut for close to a decade. Frequent bouts with the WICB and a number of other off-field issues have forced the likes of Chris Gayle, Dwayne Bravo, and others to miss out in this Test series. West Indies will be led by Denesh Ramdin, and will have to look to Shivnarine Chanderpaul to do the bulk of the scoring. The diminutive but evergreen southpaw will be West Indies’ major hope, and if England manage to sort him out early the contest is likely to be a one-sided one. Live Updates: England tour of West Indies 2015, 1st Test at Antigua Day One

On the other hand, even England have a lot to prove. After being dumped from the ODI team, Alastair Cook will want to come back strongly. He has suffered a prolonged run of poor form even in Tests. Alongside Cook, Jonathan Trott’s return to the side will be the most-scrutinised. Youngsters Adam Lyth, Adil Rashid, Ben Stokes, Jonny Bairstow, and Mark Wood will know that a few good performances here will go a long way in becoming regulars for the side, while failure will almost certainly spell doom. Live Scorecard: England tour of West Indies 2015, 1st Test at Antigua Day One

Catch the live scorecard and ball-by-ball commentary of England tour of West Indies 2015, 1st Test at Antigua Day One 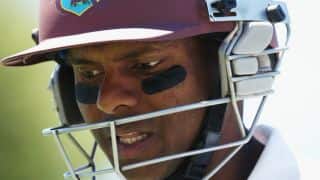