Holder scored 202* on day three in Barbados while putting on 295 for the seventh wicket.

Scoring a maiden Test double-century to bury England in his comeback international match has left West Indies skipper Jason Holder a very pleased man, for not only has a personal target been achieved, but the home team have no way of losing the first Test at Kensington Oval.

Holder hit a stunning unbeaten 202 on day three in Barbados while putting on 295 for the seventh wicket with good friend Shane Dowrich, as West Indies declared on 415/6 to set England a target of 628. At stumps on Friday, the tourists were 56 for no loss after 20 overs. (READ MORE: Jason Holder’s 202* helps set England 628 to win)

Speaking to Sky Sports, Holder revealed that a Test double-century was a personal milestone he had set himself when his career began.

“It was something I really wanted to achieve from the start of my career. I was fortunate to make my debut here in front of my home crowd. Since then I’ve had four or five half-centuries here so it was just about converting one of those into a hundred. I finally got the hundred and turned it into a double!” (FULL SCORECARD: WEST INDIES vs ENGLAND, 1st TEST)

Holder missed West Indies’ tour of Bangladesh in November after he sustained a shoulder injury in India, and returned to first-class cricket in the first week of January. He ended 2018 at tenth place in the ICC rankings for Test bowlers and second in the allrounders’ table, after taking 33 wickets last year at an average of 12.39 to go with 336 runs at 37.33.

Back in charge of West Indies, he took two wickets as England were bowled out for 77 on day two and then joined Dowrich at 120/6 in the second innings and staged a remarkable partnership.

“It was a good day!” Holder said “It was very challenging up front, both Jimmy [James Anderson] and Stokesy [Ben Stokes] made us play at lots of deliveries and they were very challenging going down the channel. Stokesy was a threat all day and credit to him he kept running in all day. I felt he put in a really good effort and he made us work hard for our runs. But it was a pleasing day. To bat past tea and form the partnership that we did was really pleasing. Friends and family were here to really enjoy it.”

Having not opted to enforce the follow on after England were bowled out for 77 on day two, Holder was fixed on batting them out of the match.

“We wanted to declare at some point this evening because it was important for us to keep the English at bay and keep them on their feet as long as possible,” he said. “We wanted to wear them down, there is still a lot time in the Test match, we didn’t want to make a silly declaration and declare a little bit too early. At tea we decided we would bat for another half an hour to 45 minutes and then have a good crack at them this evening.

“I’ve said in previous interview that we have not used the new ball as well as we’d like. Probably a few more deliveries we would have liked them to play and challenge them a bit more,” he added. “I think you probably have to err on the fuller side here and take a drive or two. We’ve got runs on the board so we can afford to express ourselves a little bit more. I felt today we were probably a little too short and gave them time to see it, it was a case where the ball did a bit but we were probably a bit too short.” 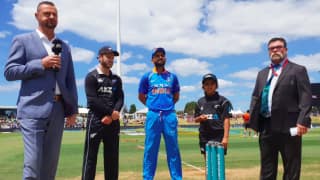