On day one of England s two-day match in Barbados, Burns made 35 off 70 balls.

While England s landmark 3-0 sweep of Sri Lanka late last year proved a memorable first international tour for Rory Burns, managing a solitary fifty in six innings has left the Surrey captain in search of a contribution that will help hold down his place as a Test opener.

Chosen to open alongside Keaton Jennings in Sri Lanka after Alastair Cook s retirement, Burns managed 155 runs in three Tests in Sri Lanka with a best of 59. Currently in the West Indies ahead of three Tests, Burns was hopeful of gelling with Jennings as he bids to make himself a long-time opening option for England.

“We’ve had six weeks off from each other and now we’re back in each other’s pockets,” Burns said after day one of England s tour match against a CWI President s XI. “We’ll keep taking our catches together [in training], scoring some runs together and see how we go. It’s only going to grow the more time we spend together. I feel like I’m shaping up nicely and putting myself in decent positions. I haven’t had the score I’d like to for England yet, to hammer it home, but that’s cricket sometimes.” (ALSO READ: England vs CWI President s XI: Root, Stokes fifties help tourists to 317)

On day one of England s two-day match in Barbados, Burns made 35 off 70 balls in what was the third-highest score of a total of 284 after Joe Root s run-a-ball 87 and Ben Stokes 56 from 97 deliveries. He added 72 with Root, the highest stand of the innings, and getting the chance to bat with his skipper was helpful for the 28-year-old.

“Sometimes you’ve got to be happy to play second fiddle,” said Burns. “When a batsman gets away and you have to dig in that’s fine, he played very nicely. If someone is off and flying you’ve got to stay with him, that’s what a good partnership is and I thought we dovetailed nicely. It’s not always free-flowing cricket that gets played here and it was quite attritional at points.” (ALSO READ: West Indies recall Darren Bravo, Alzarri Joseph for first England Test)

One of the bowlers Burns faced is pacer Alzarri Joseph, who is part of West Indies Test squad. Back in the setup after a stress fracture of the back, Joseph bowled 14 overs and dismissed Jennings lbw for 10. Getting a look at him was also handy for Burns ahead of the three-match Test series

“For me it was quite a big advantage,” he said. “I know I haven’t played against a lot of these guys or in these conditions much so anyone I can get a good look at, or get a bit of confidence against, the better. It was nice to have a look at him today. It was a decent day’s cricket and a good hit out.”

West Indies host England for three Tests, five ODIs and three T20Is. The series gets underway at Bridgetown on January 23. 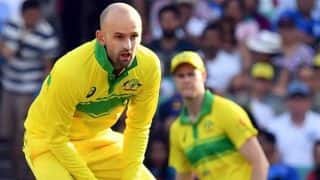 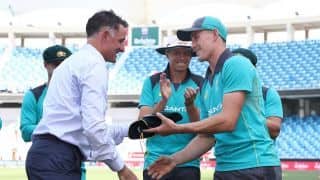