Joseph, who had picked 2/38 in his ten overs in England’s first innings, came out to bat on day three after West Indies lost two early wickets - but no before taking the lead past the 100-run mark.

West Indies’ young fast bowler Alzarri Joesph’s mother, Sharon, died ahead of play on the third day against England in the 2nd Test at Antigua, but the 22-year-old has opted to play his part in the remainder of the Test match.

“It is with great sadness that we have been informed that Sharon Joseph, the mother of our young fast bowler Alzarri Joseph, has passed away,” Rawl Lewis, West Indies’ team manager, said.

“We know that this will be a very sad and difficult time for Alzarri and his family. But we hope that it brings him comfort to know that his grief is shared by us all – his team-mates and support staff of the Windies team – and we would like to extend our deepest sympathies to him and his family.”

Sad news in the WINDIES camp. Our young fast bowler Alzarri Joseph's mother, Sharon Joseph, passed away earlier today. Please join us as we express our heartfelt condolences to Alzarri and his family during this very difficult time. pic.twitter.com/hRbheXM2sI

Joseph, who had picked 2/38 in his ten overs in England’s first innings, came out to bat on day three after West Indies lost two early wickets – but no before taking the lead past the 100-run mark.

Joseph, who was part of the West Indies U-19 World Cup winning squad in 2016 made his Test debut against India the same year at Gros Islet and has played eight Tests, including the ongoing one.

He was sidelined for a while with back problems and had also had left a tour to be beside his ailing mother. Members from both the teams took to the field with black arm bands around their arm.

The youngster was seen in the team huddle ahead of the start of play with tears in his eyes. Board President’s XI vs England Lions: Chance for young hopefuls to impress 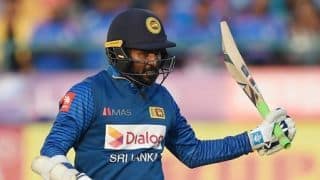