West Indies hold a 2-0 lead in the series following victories by 381 runs in Barbados and by 10 wickets in Antigua.

Keemo Paul struck with his first delivery of the series as England reached lunch at 46 for one after being put in to bat by stand-in West Indies captain Kraigg Brathwaite on the first morning of the third and final Test at the Darren Sammy Stadium in St Lucia on Saturday. (Follow: 3rd Test Live Updates)

Drafted into the final eleven as replacement for regular skipper Jason Holder, Paul ended Keaton Jennings‘ tortuous occupation of the crease when the opening batsman fell for the third time in three innings in the series to catches in the slip cordon.

England will resume in the afternoon with Rory Burns (27 not out) having been joined in the middle by Joe Denly, who made his debut in the second Test as Burns’ opening partner. (ALSO READ: West Indies put England into bat in final Test)

Dropped earlier by Roston Chase at third slip off Kemar Roach, the leading wicket-taker in the series with 13 victims, Jennings failed to make the most of the reprieve as the left-hander drove loosely at the seam bowling all-rounder’s opening delivery midway through the session to depart for eight off 43 balls via a straightforward catch to Darren Bravo at first slip.

Jennings, who failed in both innings of the first Test in Barbados, which the West Indies won by 381 runs, was then dropped for the second match in Antigua, where the home side romped to victory by ten wickets inside three days to take an unbeatable 2-0 lead in the series and reclaim the Wisden Trophy after ten years in English possession.

He is one of two changes to the tourists’ eleven as left-handed all-rounder Sam Curran was omitted in preference for fast bowler Mark Wood. (ALSO READ: Inexplicable conditions in county cricket affecting England batting: Mark Ramprakash)

West Indies’ only change to the victorious team from the first two matches was forced by the International Cricket Council s ruling which holds the captain primarily accountable when his team falls short of the required over-rate of 15 per hour.

Despite winning the match with two days in hand, it was determined by match referee Jeff Crowe that the West Indies were two overs short, on average, over the course of the match.

Given previous infractions under Holder’s captaincy over the past 12 months, this latest situation took him past the penalty points threshold with necessitated the sanction which has become the main West Indian talking point in between the second and third Tests.

Following the conclusion of the second Test, Holder acknowledged his guilt and did not challenge Crowe s ruling.

West Indies hold a 2-0 lead in the series following victories by 381 runs in Barbados and by 10 wickets in Antigua. 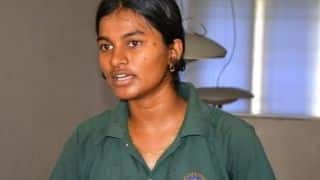 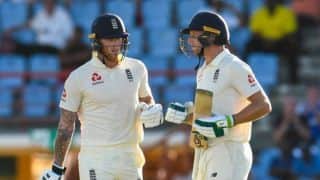