West Indies player Shannon Gabriel has been suspended by the ICC for the first four ODIs of the upcoming five-match series against England after his accumulated demerit points reached eight within a 24-month period following his latest breach of the ICC Code of Conduct, for which he received a 75 per cent fine and three demerit points. (ALSO READ: Shannon Gabriel charged by ICC over alleged homophobic remark)

The suspension comes following his alleged homophobic remark in an exchange with England captain Joe Root during the third Test.

“During the third day of the St Lucia Test against England on Monday, Gabriel was found guilty of breaching article 2.13 of the ICC Code of Conduct for Players and Player Support Personnel, which relates to personal abuse of a Player, Player Support Personnel, Umpire or Match Referee during an international match , following an incident with England Captain Joe Root,” the ICC said in a release.

Stump microphones picked up an interaction on the third day in St Lucia between Gabriel and Root, in which the latter responded: Don t use it as an insult. There s nothing wrong with being gay.

The ICC, cricket s governing body, said Gabriel had been charged with a breach of its code of conduct in relation to the personal abuse of a player, umpire or match referee. 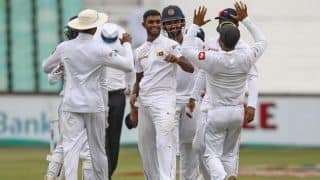