Statistical highlights of the fourth ODI tri-series match between India and the West Indies at Port of Spain. 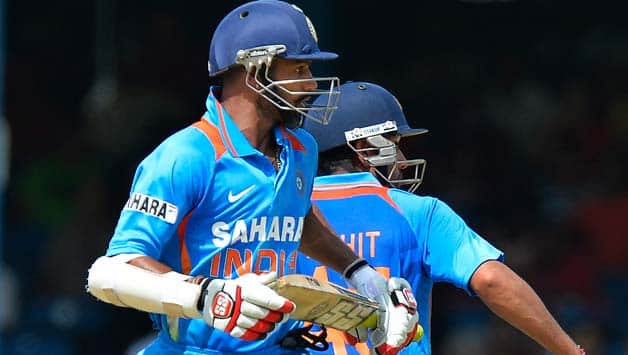 Statistical highlights of the fourth ODI tri-series match between India and the West Indies at Port of Spain.

# Umesh Yadav‘s excellent figures of three for 32 are his career-best in ODIs. With six wickets at 23.16 runs apiece in three games, he is the leading wicket-taker in the ongoing competition.

# Sunil Narine (21 off 33 balls) has registered his highest score in the West Indies in ODIs.

# Virat Kohli and Ravichandran Ashwin were associated in a stand of 90 — India’s second highest for the seventh wicket against the West Indies in ODIs, next only to the 91 between Ashwin and Rohit Sharma at Ahmedabad on December 5, 2011.

# India’s well-deserved 102-run victory is their largest in terms of runs vs West Indies in the Caribbean, eclipsing the 56-run victory on June 2, 2002.

# This total is their second highest vs West Indies in the Caribbean in ODIs, next only to the 339 for six at Kingston on June 26, 2009.

# Bhuvneshwar Kumar (3 for 29) has equalled his best bowling performance in ODIs.

# Dhawan has registered two centuries and three fifties in thirteen innings in ODIs. India have won all five games when Dhawan has posted an innings of fifty or more in ODIs.

# During his 69, Dhawan hit two sixes — a feat achieved by him for the first time in an ODI.

# Rohit’s batting record against the West Indies is superb in ODIs — his tally being 735 runs (ave.61.25) in 17 matches, including eight fifties. He remains the only batsman to average 60-plus in India-West Indies ODIs.

# Dhawan and Rohit were involved in a stand of 123 — India’s highest opening partnership in the West Indies, eclipsing the 116 (unbroken) between Sourav Ganguly and Sachin Tendulkar vs West Indies on April 27, 1997.

# Dhawan and Rohit have shared three century stands — the most by any pair in ODIs this year.

# Dhawan and Rohit have completed 500 runs in partnership aggregate for the opening wicket, totalling 542 in eight innings, including three stands of 100-plus and two fifty-plus, at an average of 67.75. Their average is the highest amongst the Indian opening pairs with 500 runs or more in ODIs.

# Kohli (102 off 83 balls) has posted his second century against the West Indies — his 14th in ODIs and his first as captain.

# Kohli has become the first captain to record a hundred at Port of Spain in ODIs. He has become the third Indian captain after Virender Sehwag (219 off 149 balls at Indore on December 8, 2011) and Rahul Dravid (105 off 102 balls at Kingston on May 18, 2006) to post a century against the West Indies in ODIs.

# Kohli has got his 14th Man of the Match award in ODIs.