West Indies won the third Test against England at the Kensington Oval in Bridgetown, Barbados by five wickets to level the series 1-1. Jermaine Blackwood hit the winning runs when he smashed Moeen Ali over mid-on for a boundary, remaining unbeaten on 47 off 96 balls at the end of the game. The foundation of the victory was the 108-run partnership for the fifth wicket between Blackwood and Darren Bravo, who was dismissed on 82 with just four runs left for victory. Updates: West Indies vs England, 3rd Test at Barbados

The third session belonged completely to the West Indians, with Bravo and Blackwood defying the English bowlers with a sense of patience and responsibility. Barring the dismissal of Shivnarine Chanderpaul shortly after tea, the visitors could not do much to make the most out of the sudden flurry of dismissals that put West Indies in a position of peril.

Bravo kept his cool for the most part in his innings, with no runs being scored for almost six overs at one stage. The hosts appeared psychologically relaxed once they crossed the 100-run mark. Bravo eventually brought up his 11th half-century, though he consumed 115 deliveries to reach the mark. Blackwood too displayed maturity on the other end, despite falling to the temptation of flexing his arms occasionally.

As much as the Bravo-Blackwood pair are to be praised for their calm handling of the situation during a mid-innings crisis, England are also to be blamed for missing out on several opportunities. The biggest miss occurred during the 36th over when England wicketkeeper Jos Buttler missed out on an easy stumping opportunity of Blackwood. The dismissal could have changed the course of the game at a time when England still had a firm grasp over the hosts. A handful of misfields too ensured that the hosts were allowed to get the extra runs to boost their confidence.

Once past the 150-run mark, the pair began to attack the opposition with little worry, with Bravo smashing Ali over long-on on many an occasion. The hurry to wrap the game up also resulted in the dismissal of Bravo, who was caught at mid-off by Stuart Broad with just four runs left for victory. In the end, it was Blackwood who got the honour of levelling the series.

Earlier in the day, England Gary Ballance failed to revive his team’s dismal batting performance after resuming on a shaky score of 39 for five. The tourists lost their sixth when Ballance was dismissed for 23, with the Zimbabwe-born batsman getting caught by Bravo off the bowling of Veerasammy Permaul. Ben Stokes added 33 runs for the seventh wicket with Jos Buttler, before a series of dismissals saw England collapse from 95 for six to 98 for nine. Anderson was the last man to be dismissed as England wrapped up for 123.

Man of the Match: Jermaine Blackwood

Man of the Series: James Anderson 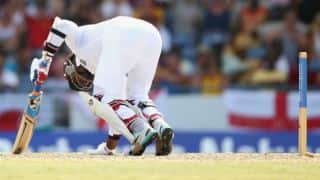 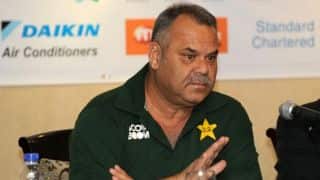