West Indies women’s team management say their side will not be distracted by the controversy surrounding their male counterparts. The West Indies women arrived here last week to face hosts Australia in a bilateral series, even as the West Indies men’s side took the unprecedented step of abandoning their tour of India over a pay dispute with their union — the West Indies Players’ Association (WIPA), reports CMC.

Captain Merissa Aguilleira said while her team were aware of the issues, they remained focused on their upcoming matches. “We’ve been following it, it’s been hard but we don’t want it to distract us. We came here to represent the West Indies and we want to make sure our fans aren’t disappointed,” Aguilleira said.

“We’re here to play cricket, that’s our focus. I really wish the guys good luck and I know they’re going through a tough time right now.” The West Indies men walked out on the tour of India last Friday following the fourth One-Day International (ODI) at Dharamsala, upset over new contracts they have claimed would result in a drastic reduction in their earnings.

The move sparked an angry response from the Board of Control for Cricket in India (BCCI) who have since announced they would sue the West Indies Cricket Board (WICB) for losses and also suspend future bilateral series. Women’s coach Sherwin Campbell said he hoped the issue could be resolved amicably but stressed that his side would not be affected by the developments.

“We are separate teams and separate tours and we are focused on that,” said Campbell, a former West Indies vice-captain, who played 52 Tests. “You don’t want to see teams not being able to go to events, so hopefully they can resolve the issue as quickly as possible.” The West Indies women face Australia in four Twenty20 Internationals and four ODIs, starting 2 Nov. 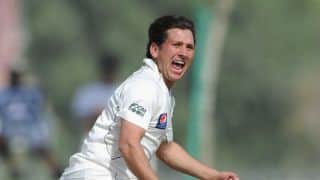