West Zone need 270  runs to win Deodhar Trophy 2014-15. The stop start East Zone batting effort failed to reach climax point courtesy the timing of dismissals of set batsmen. Yet half centuries by skipper Manoj Tiwary (75), Virat Singh (54) and Biblab Samantray (60) who played a gem of a little cameo took their score to a competitive 269 for 8 in fifty overs. Dhawal Kulkarni was the pick of the West Zone bowlers with figures of 2 for 35.

West Zone began their quest for the Deodhar Trophy with a bang, striking twice in the first four overs with next to nothing on the board. East Zone’s top order woes remained unresolved as they lost both openers Shreevats Goswami and Ishank Jaggi quicker than one could utter the words Deodhar Trophy Final. The Match briefly followed a similar pattern as the semi final between East Zone and North Zone as the two early dismissals brought to the crease the East Zone skipper Tiwary who has been in imperious form, having registered his highest individual List A score of 151 in the previous game. He continued batting in the same vein as he had in the game against North Zone, not just soaking the pressure that came with the situation East found themselves in but in fact counter-attacking the West Zone bowlers.

Tiwary and 16 year old Virat Singh added 135 runs for the third wicket before being dismissed in quick succession and thus the Pendulum had swung again. Tiwary got exactly half the score as the previous match, making a belligerent 75 from 95 balls. His innings included three fours and four massive sixes. The arrival of Saurabh Tiwary and Samantray coincided with that of the batting powerplay, but the untimely loss of set batsmen made it impossible for them to take full toll of the field restrictions. Despite their troubles they managed to score close to a run a ball in the powerplay overs. In the process the two batsmen at the crease, Saurabh Tiwary and Samantray had got their eye in and were setting themselves up for a charge in the last 10 overs to try and propel the score towards 300. But yet again, the trend of losing wickets on the brink of a potential assault hampered East Zone’s progress. It was Samantray’s cameo of 60 from 50 balls  that took them to 269 for 8 in their fifty overs. 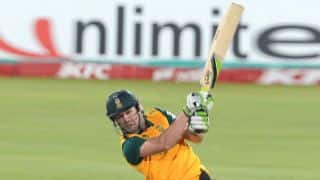