The forthcoming T20 and ODI series in South Africa could well decide the fate of the national team's Australian coach Dav Whatmore or lead to the axing of some senior players from the squad. The forthcoming T20 and ODI series in South Africa could well decide the fate of the national team’s Australian coach Dav Whatmore or lead to the axing of some senior players from the squad.

The buzz within the PCB also indicates that already there is talk about the Chairman of the board Zaka Ashraf deciding to take some strong decisions when the team returns home in late March.

To complicate matters for Whatmore and in fact the team management reports about problems in the dressing room have also not helped their cause.

The daily Jang reported on Wednesday that immediately after the massive innings defeat in the third Test Whatmore had chosen to take out his anger on Imran Farhat who incidentally was Pakistan’s best player in the match with scores of 30 and 44.

“Instead of taking out his anger on the senior players for their inept performances, Whatmore accused Farhat of working against team’s interest and playing for himself.

“This led to an argument between the two with the latter reminding the coach that at least he had chosen to play positively against the South African bowlers and it had produced good results. Farhat also told Whatmore to not blame him and look at the team’s passive approach in the matches,” the report said.

Another report claimed that the team management had tried to hide the real reason for the fitness problems facing left arm pacer Junaid Khan on the tour.

The report said that Junaid had fallen off a water scooter during a outing and hurt himself which led to his fitness problems and kept him out of the last two Tests.

“The team management has tried to give the impression that Junaid hurt himself on the field,” the report said

“Clearly, there is pressure on the board and the only thing that can save some heads from rolling is if the team makes a strong comeback in the T20 and ODI series,” an insider in the board said. 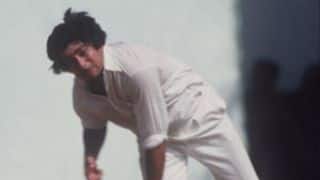 Karsan Ghavri: The southpaw with a vicious bouncer