Sachin Tendulkar – the prolific run-maker, biggest cricketing idol and complete batsman would be celebrating his 45th birthday on April 24. Ahead of his big day, Boria Majumdar during his book launch ‘Eleven Gods and Billion Indians’ in Mumbai on Monday recollected several anecdotes along with Tendulkar during the event. The launch was also attended by Michael Clarke, Ravi Shastri and Rohit Sharma.

One such incident was during his visit to the Child Trust Hospital in Chennai several years ago. Amongst a group of disabled children, one special boy was huge fan of Tendulkar. Who knew a miracle was round the corner. Back to the incident, the child was 75-80 per cent disabled and had lost all hopes walk again in his life.

Tendulkar was unaware that the child had never stood up from his chair and walked in his life ever. Unknowingly, Tendulkar went ahead and handed a bat to the boy. In miraculous turn of events, that 11-year old boy stood up and played three balls of cricket with his idol.

Leaving aside Tendulkar records galore: his 35,000 international runs, 100 100s, all came to a standstill because ‘the master’ himself gave a new life to the child. 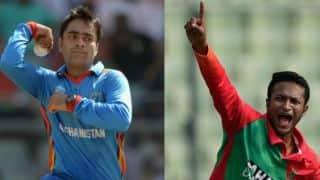