There has been criticism of how the pitch for the 2nd Test between India and England is heavily loaded in favour of spinners.

Batting legend Sunil Gavaskar has voiced his displeasure over the criticism of the Chennai pitch prepared for the ongoing 2nd Test between India and England. Former England captain Michael Vaughan and Matt Prior have been critical of the track which has been branded by some as rank turner.

However, Gavaskar cited the example of how Indian batters, especially opener Rohit Sharma, played on the pitch to score a century. “We saw how Rohit Sharma getting 150, and yesterday he was getting close to ball and batting. This criticism (on pitch) is pretty warranted,” Gavaskar said on Star Sports ahead of the third day’s play.

He then compared the current scenario to when the pitch favours pacers, alleging that people stay shut when seamers are having a field day on tailormade pitches. “Some of them are saying that (ball shouldn’t be going through the top of the surface from day 1) – but you have a seeming pitch in England. Australia get dismissed for 46 – the ball keeps seeming all throughout. No one talks about that. It’s always about Indian pitches, and when the ball starts to turn, people pose a problem,” Gavaskar said.

“One or two who we know who don’t like India, who don’t like England, so they always have a go at India and England, so that’s fine. We ignore them because we know the double standards. But basically, we saw with Rohit Sharma’s innings, if pitch was impossible, nobody would have scored 330,” he added.

Gavaskar instead praised the pitch for being ‘challenging’ and not ‘unplayable’ as is being claimed. India batted first and were bowled out for 329 with Rohit hitting 161 while Ajinkya Rahane made 67. However, England were skittled for 134 with offspinner Ravichandran Ashwin taking a five-for.

“It’s not unplayable. It’s a challenging pitch, and that’s what cricket should be about. In the first Test, on the first two days, when nothing was happening, people were saying ‘it’s boring, nothing is happening. It’s so easy to bat.’ So, there has to be a bit of balance between what is said. You cannot be complaining all the time,” Gavaskar said.

“There are some who are forever complaining about this, that or the other. Yes, it’s a challenging pitch. Rohit Sharma showed in the first innings. More than that, in the 2nd innings, after England have been bowled out for 134, Rohit showed no discomfort against England spinners,” he added.

Gavaskar, the first player to have scored 10,000 runs in Tests, said the debate should be over which team has better skills rather than on the pitch. “You can argue that maybe England spinners are not as good as Ashwin. That they did not bowl the lines and length that Ashwin or Axar did. But you have to also argue that who has got the better technique when it comes to batting and who has the better skills when it comes to bowling. That really should be the debate rather than the pitch,” he said. 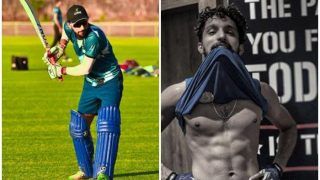 Mohammed Azharuddeen: Lesser-Known Facts About The Other 'Azhar' Who Could be IPL's Newest Crorepati at Auction 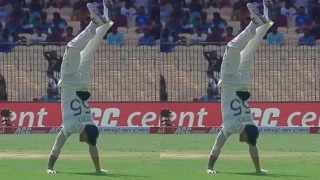 After Virat Kohli's Whistle, Ben Stokes Does a Headstand to Impress Fans at Chennai During 2nd Test | WATCH VIDEO