Shakib Al Hasan s decision to bowl first was not wrong. He had the dew factor in his mind and his plan was to restrict India below 260. 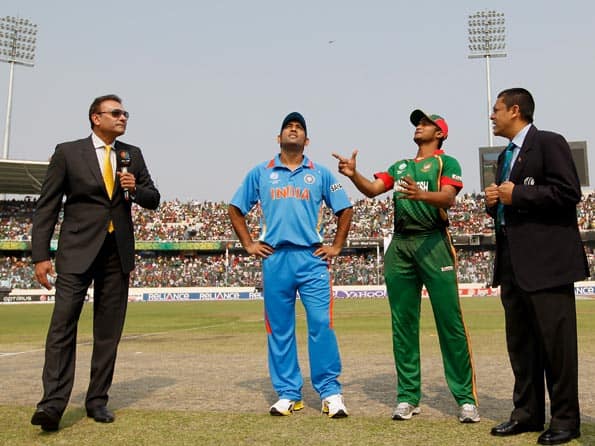 Shakib Al Hasan s decision to bowl first was not wrong. He had the dew factor in his mind and his plan was to restrict India below 260. What can the captain do if his bowlers let him down? Even Dhoni would have chosen to field first if he had won the toss.

There was wisdom in Shakib choosing to chase; the previous 12 day-nighters at the Shere Bangla were won by the team batting second.

The main strength of Bangladesh is the bowling and a lot of expectations were built around them. But they failed to deliver probably undone by the pressure.

Shafiul Islam delivered the first ball of the World Cup short and wide. Rubel Hossain, too, tried hard and bowled a leg-stump line which was inviting trouble against a side prolific with hitting on the leg side. The spinners were brought on early, but the sting and discipline, which outclassed the Kiwis last year, was sadly missing today.

Razzak was found wanting as he allowed Sehwag and Co. to capitalize on the inside-out stroke without much fuss. Mahmudullah and Naeem Al Islam were tried as stock bowlers, but they too were undisciplined.

No bowler was able to shackle the Indian batsmen s free-scoring abilities as they bowled too short, fed the batsmen with plenty of half volleys and gave too much width. The spinners failed to vary their length. In big matches, such undisciplined bowling deserves no mercy. The Bangladesh’s bowlers failed to maintain composure in the grandest match of their lives.

Even though India savaged Bangladesh with their bat, they showed much spirit while batting. Imrul, Tamim, Junaid and Shakib gave the Indian bowlers some anxious moments.

If only the Bangladesh bowling showed some discipline the contest would have been lot closer than it turned out to be.

Bangladesh bowling needs to do a lot more homework before their next encounter against Ireland. If the main strength of the team combination is not okay then surely things are not on the right track.

Lastly, I felt the team felt the absence of Mashrafe Mortaza, especially in the slog overs. On flat tracks, the pace bowlers need to exhibit a lot of craft, something Mortaza is blessed with to test the batsmen. Shafiul and Ritubel lack that. They should bear in mind the importance of pitching it right on batsmen-friendly pitches by maintaining a tight line and length. Else, they will keep getting hammered.