Dhoni is presently in the US for a golf charity event, and will be returning on Tuesday and will soon join the team.

The upcoming Vijay Hazare Trophy 2015-16 will mark the return of India’s captain in limited-overs cricket, MS Dhoni, to the domestic circuit. It will be the first time since Dhoni will be seen playing in the Indian domestic cricket circuit since 2007, as he will be turning up for his homeside Jharkhand in the tournament. However, Dhoni has refused to captain the team as he will be playing under the much younger teammate, the right-arm India pacer Varun Aaron. Dhoni has declined the offer made by the Jharkhand State Cricket Association (JSCA) as he has told the officials that he would not be the right choice for the captaincy job, only because he is not aware of the potential of every single cricketer which has been named in the side for the tournament.

According to Mid Day, the secretary of JSCA Rajesh Verma informed that Dhoni was made an offer to lead his state side in the upcoming Vijay Hazare Trophy 2015-16, but he declined. Verma said, “We had offered him the captaincy, but he refused. He didn’t want to take up the captaincy because he is not aware about the potential of many players in the squad. We have a very young squad with many players advancing from the U-19 and U-23 teams. He (Dhoni) also wanted someone young to experience leading the team as that would help groom leaders for the state.”

Dhoni had retired from Test cricket in last year during the tour of Australia, and he has been associated with the Indian cricket team only when there are limited-overs series. Dhoni is presently in the US for a golf charity event, and will be returning on Tuesday and will soon join the team. Dhoni’s return to the domestic circuit will provide him ample amount of time and opportunities to gear up for India’s limited-overs affairs lined up after the end of the Test series against South Africa at home.

Verma added that Dhoni’s presence in the team will be a massive boost to the young cricketers from the Jharkhand team. “He is a father figure to the boys. It is a good morale-booster for the team. He will use his experience of captaining Team India whenever Aaron requires any help,” Verma said.

The Indian cricket team will be touring Australia for a five-match One-Day International (ODI) and a three-match Twenty20 International (T20I) series in January, and on their return, they will face Sri Lanka in a three-match T20I series at home. The Indian cricket team will then participate in the Asia Cup — a T20 tournament — in Bangladesh, which will be followed by the ICC World T20 2016 at home. 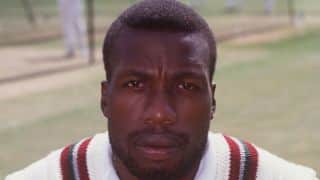