BCCI has decided to use 'limited DRS' during the knockout stages of the Ranji Trophy this season.

Having come under fire in the last domestic season for poor standards of umpiring, the Board of Control for Cricket in India (BCCI) under the Supreme Court-appointed Committee of Administrators (CoA) has decided to use ‘limited DRS’ during the knockout stages of the Ranji Trophy this season. But the BCCI officials have called this another attempt to sweep the mistakes under the carpet rather than address the issue of lack of quality umpires.

Speaking to IANS, a senior BCCI official said that it has become the norm under the CoA to ensure that the image of the board remains intact on the outside even if the foundation is getting weaker by the day.

“We are not surprised in the least. This is how things are done these days, in an ad-hoc manner that focuses more on perception than on substance. What is the intent here? Is the intent to ensure a mechanism to resolve bad decisions in the knockouts? What about the other 2010 odd games (BCCI hosted a total of 2017 games in the 2018-19 domestic season)? Who is taking the ownership of bad umpiring in those games? Where is the effort to improve the standard of umpiring? Classic eyewash this is,” the official rued.

GM Cricket Operations Saba Karim, who is currently in the UK, had said that the idea to introduce ‘limited DRS’ is to avoid howlers as was seen during the knockout stages of the 2018-19 season of the Ranji Trophy. “Last year, in some of the knockout matches, there was some flak on umpires because there were some terrible howlers. So, we want to avoid all that and use whatever help we can get,” he explained.

But a senior board functionary wants to know why an effort isn’t being made to ensure that things improve right from conducting fair examination of umpires.

“Questions are raised over the process of examination to recruit umpires. Why isn’t that being looked into? A fair examination shouldn’t be that big a problem. Then, there is an academy for umpires in Nagpur, who takes responsibility of the functioning of that academy? And how many umpires do we have in the international panel? S. Ravi was the last. So clearly, there is lack of ownership,” the functionary said.

“After managing to scrape through domestic games, when they are handed duty during the Indian Premier League (IPL), they crumble under pressure. The idea to have Indian umpires in the IPL was to help them experience top-flight games and the pressure that comes with it. But here, they are getting exposed every second game as was seen in this year’s matches. So, the same must also be happening in the domestic circuit. Just because it isn’t televised, you don’t see it,” the functionary pointed. 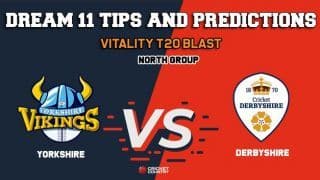