Veda Krishnamurthy is determined to improve her performance so that the selectors pick her for the squad at the earliest.

Veda Krishnamurthy, who has been left out of the Indian women s cricket team for the New Zealand tour, has taken the responsibility for not doing well in the last season but is determined to improve her performance so that the selectors pick her for the squad at the earliest.

As the selection panel announced both the limited-overs squads to visit New Zealand, the 26-year-old failed to find a spot. At the back of her mind, the middle-order batter knew that there were hardly a few games left in the domestic circuit to make an impact.

I was pretty upset but at the end of the day it is part of the sport… You really can t keep dwelling over something which you can t control. When I couldn t find my name in the team, the immediate thing I had in my mind was that there are a few games left at the Senior Women s One-Day League. Then I had Challenger Trophy. So as far I was getting to play more matches, I knew I had to do well to make an impact, to show the selectors that I am back and in the form and there is a lot more to offer and I am right there, Veda told ANI.

Veda had an ordinary outing at the ACC Women s T20 Asia Cup in Malaysia, Sri Lanka tour and ICC T20 World Cup in the Caribbean.

The input that former coaches Tushar Arothe and Ramesh Powar had put in made a great difference to me. It is just that I wasn t able to step up in and out of the 11 which also played on my mind. At the end of the day, I had the opportunity to prove all… I take the responsibility for not doing well, the youngster from Karnataka said.

India s recent campaign at the ICC T20 World Cup ended at the hands of England in the semi-finals which gave rise to a controversy as veteran batter Mithali Raj was dropped for the crunch game.

The fissures in the team were out in the open with Mithali and the then coach Ramesh Powar making damning allegations against each other. That also led to speculations of differences between the cricketers themselves.

The right-hander said that the team is united but dodged the question on Mithali s exclusion from the semi-finals. We have been together; there are a lot of us who are good friends otherwise also. I really haven t discussed anything about the controversy because it is something I had no clue about. So there is no point of assuming. I would say it should not affect in anyways to the team, she said.

Having played under the command of both ODI captain Mithali and T20 captain Harmanpreet Kaur, she said, Mithali is really calm and composed while Harmanpreet is an aggressive captain. Every individual has different characters. Other than that, both of them are really good. I have got to play under both of them. It is how they look at things; how they want to go about it and I have enjoyed playing under both of them.

The controversy which invited both the Committee of Administrators (CoA) and the Board of Control for Cricket in India (BCCI) to step in led to the appointment of WV Raman as the head coach.

When asked about her expectations from Raman, the belligerent batter said, I really haven t had any conversation about the game with him (WV Raman). I happened to meet him at Vijayawada during the Challenger Trophy. Other than that, I have heard he is really a wonderful coach. I am looking forward to working with him and get to know more about his knowledge so that I can implement it in my game.

Veda, who was signed by the Hobart Hurricanes for the third edition of the Women s Big Bash League (WBBL), couldn t get a second call for the ongoing fourth edition, which features only two countrywomen Harmanpreet and Smriti Mandhana.

The platform which boosts the performance of players helped Veda to play the game with excellent cricketers and learn a lot of things last time in 2017.

As the next season of WBBL will move to a separate window from October to December this year, the middle-order batter said, For the next edition there is a long time to go, a year for that to happen. There is a lot more cricketing in between which is going to happen. I want to concentrate on that. If I excel and do well and get into the contract for the next edition, I will be really happy to go.

Like the popularity of WBBL in Australia, Veda thinks that women s cricket has sufficient depth to start a T20 league in India as well.

There are a lot of games for domestic cricketers…from where they were playing four games; now they are playing eight games each. It is a huge step taken by the BCCI which really helped all of us. I hope they carry forward the same thing and add a couple of tournaments so that we can get to play more games, she said.

We have such a competitive game. In the Challenger Trophy, even though players didn t hit big scores, they went down to the wire. There are a lot more players who can bring more to the game. I think we definitely are looking good into having an Indian Premier League (IPL) with probably four or five teams. We also have international players, who will bring in talent and experience. And how people are looking at women s cricket so I think it can happen in any time now. I just wish it happens much faster, Veda added.

As India will embark on New Zealand tour to play limited-over matches, starting from January 24, the right-hander said that the White Ferns are a good side and she is looking forward to following the game to root for the national team.

Being a senior and experienced player, Veda concluded with a piece of advice to youngsters that there is a camp prior to the series where they can get into the depth and do well. I wish them luck. 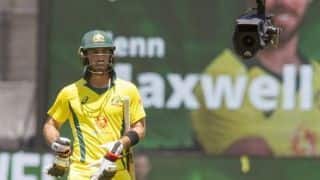