Almost 45 days after the World Cup final, Neesham seems to be in a better frame of mind.

Allrounder Jimmy Neesham is ready to deal with a lifetime of jibes from people about New Zealand‘s loss to England in the World Cup final.

READ: As Neesham hit Super Over six, his coach breathed his last

On July 14, New Zealand and England played out what many call “the greatest ODI” of all time. After the scored were tied at the end of 50 overs and then again after the Super Over – during which Neesham batted – with nothing to separate the two teams, England were announced winners of the basis of a better boundary count.

Shortly after the result, while some of the New Zealand players were able to get over it, Neesham expressed his disappointment and had tweeted, “Kids, don’t take up sport. Take up baking or something. Die at 60 really fat and happy”, indicating he was yet to get over how things panned out at Lord’s.

However, after almost 45 days, Neesham seems to be in a better frame of mind but believes it’s something that would never leave the allrounder for the rest of his life.

“I’ll be playing a game of table tennis in 2050 and we’ll get to deuce and the person in the next table will probably [joke about boundaries],” Neesham told Radio Sport. “People are definitely comfortable talking about it. That was never a problem. People were comfortable talking about it about four hours after it finished. It took me probably a month to sort of get over it and be able to joke about it.”

Neesham was left out of the tour of Sri Lanka, where New Zealand play two Tests and three T20Is so the allrounder turned to Global T20 Canada representing the Edmonton Royals. In five matches, Neesham scored 123 runs an Average of 30.75 and picked up three wickets. 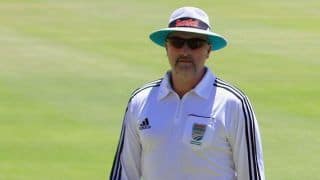