New Zealand sealed the final T20 against Zimbabwe by five wickets to ensure a complete whitewash of the tourists in all three formats in Hamilton on Tuesday. 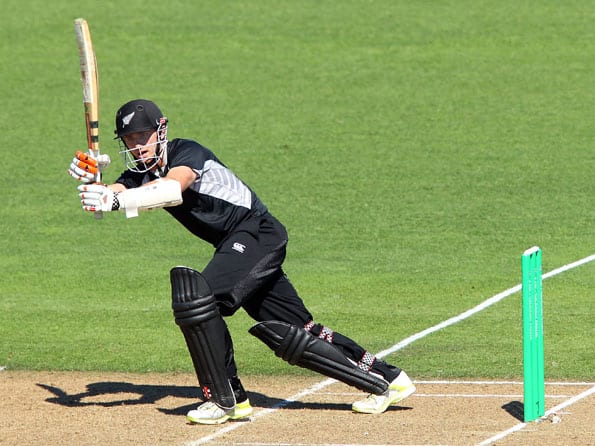 New Zealand sealed the final T20 against Zimbabwe by five wickets to ensure a complete whitewash of the tourists in all three formats in Hamilton on Tuesday.

Openers Rob Nicol and James Franklin set the stage with 103-run first wicket partnership before Nicol was caught by Keegan Meth off Elton Chigumbura for 56.

Meth then accounted for Franklin (60) with a freakish run-out from the boundary, but Brendon McCullum kept the pace going, and Kane Williamson hit a few lusty blows in the end to take the hosts home with two balls to spare.

Earlier, Zimbabwe produced their strongest batting display of the tour to set the home side a target of 201.

Half-centuries from opener Hamilton Masakadza (62) and captain Brendan Taylor (75) gave Zimbabwe a realistic prospect of claiming their first victory of the tour, as the Africans ended their innings at 200 for two.

Under orders from Taylor to break the shackles in the final match of what has been a dismal tour, Zimbabwe’s opening batsmen Masakadza and Stuart Matsikenyeri (32) posted a quick-fire 76-run opening partnership.

It was the first time the tourists’ openers have managed a stand exceeding 50 runs in the entire tour.

Masakadza, who also scored a half century in the first T20, made the most of the fast outfield to put the New Zealand attack under pressure, while Matsikenyeri scored successive sixes off Michael Bates.

Taylor made a major contribution with 75 off 43 balls as New Zealand made uncharacteristic fumbles in the field and unsuccessfully tried to staunch the flow of runs by making 15 bowling changes in their 20 overs.

Bates and Ronnie Hira were the only wicket takers for New Zealand but both proved expensive, with Bates leaking 47 runs off four overs and Hira going for 31 off three.

Speaking before the match, Taylor said the final outing was a chance to take something positive from a tour in which Zimbabwe have been so far outclassed in Test, one-day and T20 formats.

“It’s been hard but it can only make us better players,” he said. (AFP)

Man of the Match: James Franklin