The Norwegian kept his composure in a match that was twice interrupted by rain on Court 12 to complete a victory, his first win at the grass-court major.

London: Casper Ruud dug deep to win his maiden match at Wimbledon on Monday when the third seed edged Albert Ramos-Vinolas in a hard-fought first-round encounter on a rain-interrupted day.

The Norwegian kept his composure in a match that was twice interrupted by rain on Court 12 to complete a 7-6(1), 7-6(9), 6-2 victory, his first win at the grass-court major on his third appearance.

Ruud dominated the tie-break after a tight opening set before also prevailing in far more dramatic circumstances at the same stage in the second set. He rallied from 2/6 down to clinch a topsy-turvy tie-break in which he saved five set points. It proved a decisive moment in the two-hour, 44-minute contest, as the Norwegian broke twice in the third set to ease to victory.

The 23-year-old Ruud has enjoyed a ground-breaking 2022 season. He reached a maiden ATP Masters 1000 final at the Miami Open in March, before contesting his first Grand Slam championship match against Rafael Nadal on the clay at Roland Garros. He also increased his tour-level title tally to eight with triumphs in Buenos Aires in February and Geneva in May.

Despite opening his grass season with defeat to British wild card Ryan Peniston at The Queen’s Club, Ruud will hope his solid performance against Ramos-Vinolas is a sign his high-powered game can adapt well to the surface. He fired 44 winners against the Spaniard on Monday, including 14 aces, to cut his deficit in the pair’s ATP head-to-head series to 2-3.

Alejandro Davidovich Fokina let slip three match points in the third set against seventh seed Hubert Hurkacz and was down a break on two occasions but went on to advance to the second round with a hard-fought 7-6(4), 6-4, 5-7, 2-6, 7-6(10-8) win.

“Really I don’t know how I won this match. He had in the fifth set [a] 5-4 [lead] and [he was] serving with the new balls. I was [thinking], ‘Okay, let’s put the return in and let’s see what happens,'” Davidovich Fokina said in his on-court interview. “But I’m so happy for the win today because I was struggling a little bit. To beat Hurkacz on grass — he [made] the semi-final last year — it’s so much confidence to myself. I’m so happy,” he was quoted as saying on the official website.

For much of the deciding set, Davidovich Fokina was left shaking his head. This year’s Monte-Carlo Masters finalist had been up two sets to none and served for the match at 5-3 in the third with a 40/0 advantage. The Spaniard put three first serves into play on those points but was unable to convert.

At 40/0, he attempted a forward-facing tweener but missed into the net. It seemed Davidovich Fokina would regret that decision. Minutes later, the players left the court for the second rain delay of the match and when they returned, Hurkacz stormed through the rest of the set and the fourth set.

“I didn’t know if I had to just rest, sleep, I don’t know. Then when we returned the second time it was tough because it was [5-5] in the third set and there was a lot of tension there,” Davidovich Fokina said. “I didn’t make it, but I just kept playing my game.”

A semifinalist here last year, Hurkacz showed his comfort on the grass as Davidovich Fokina lost his game. The Pole even served for the match in the fifth set. But the No. 37 in ATP Rankings never gave up and that paid dividends as he found a way to win after three hours and 28 minutes.

“It means a lot. I had a lot of matches that I played against Top 10 [players] and I didn’t win,” said Davidovich Fokina, who will next play Czech lefty Jiri Vesely. “Here on grass, I could prove that I could beat anyone.”

In other action on the opening day on Monday, British No. 1 Cameron Norrie got off to a good start with a 6-0, 7-6(3), 6-3 win against Spaniard Pablo Andujar. Norrie will next face another Spaniard, Jaume Munar, who defeated Brazilian Thiago Monteiro 6-2, 6-4, 7-5.

The ninth seed played a clean match, hitting 32 winners to just 25 unforced errors and losing serve just once. Norrie made his deepest run at Wimbledon last year when he reached the third round (lost to Federer). 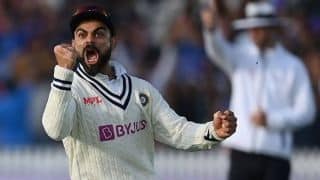 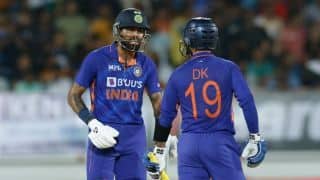 India Vs Ireland 2nd T20I: A Look At Predicted Playing XI Of Both The Teams