Rafael Nadal is in the bottom half as the second seed and will start his bid for a record-extending 23rd Grand Slam trophy against Argentine Francisco Cerundolo.

London: Reigning French Open champion Rafael Nadal is most likely to face 2017 finalist Marin Cilic in the fourth round of Wimbledon 2022 after the release of draws on Friday.

Rafael Nadal is in the bottom half as the second seed and will start his bid for a record-extending 23rd Grand Slam trophy against Argentine Francisco Cerundolo. The Spaniard, who lifted the trophy in 2008 and 2010, is seeded to meet Felix Auger-Aliassime in the quarter-finals. If they both advance that far, it would be a rematch from Roland Garros. Canadian Auger-Aliassime, who advanced to the last eight in 2021, faces a tricky opening test against American Maxime Cressy.

On the other hand, top seed Novak Djokovic could face Spaniard Carlos Alcaraz in a blockbuster quarter-final clash at Wimbledon this year. The Serbian is aiming to capture a fourth consecutive Wimbledon crown in London and will begin his title defence against South Korean Soonwoo Kwon on Centre Court on Monday, with Australian Thanasi Kokkinakis or Pole Kamil Majchrzak awaiting in the second round.

Matteo Berrettini and Stefanos Tsitsipas could clash in the other quarter-final in the bottom half. Last year’s finalist Berrettini, who triumphed on grass in Stuttgart and London this month, opens against Cristian Garin, while fourth-seeded Greek Tsitsipas plays Swiss qualifier Alexander Ritschard.

In the top half, fifth seed Alcaraz is making his second appearance at Wimbledon and starts against Germany’s Jan-Lennard Struff, with third seed Casper Ruud playing Albert Ramos-Vinolas.

Ruud, who has yet to win a main draw match at Wimbledon, is projected to face Hubert Hurkacz in the quarter-finals. The Pole arrives in London off the back of a run to his maiden grass-court title in Halle and begins against Spaniard Alejandro Davidovich Fokina. Last season, Hurkacz defeated Roger Federer en route to the semi-finals.

(With inputs from ATP) 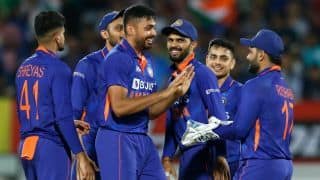 India Vs Ireland 1st T20I: A Look At India's Predicted Playing XI For The Match