Down 0-2 in the ODI series against India but the West Indies continue to ignore Chris Gayle and have left out the explosive batsman from the squad for the third one-dayer, here on Saturday. 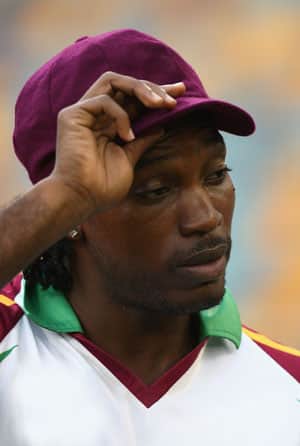 Down 0-2 in the ODI series against India but the West Indies continue to ignore Chris Gayle and have left out the explosive batsman from the squad for the third one-dayer, here on Saturday.

The squad announced for the third game of the five-match series is not only without Gayle but is also bereft of Dwayne Bravo and Ravi Rampaul, both of whom have been rested.

“Dwayne Bravo made a request of the Selection Committee to be given a break from the game and the request was granted,” the West Indies Cricket Board said in a statement.

“After an intense period of heavy workload Ravi Rampaul is being rested for the Antigua leg of the West Indies v India Series 2011,” it added.

Gayle, who has been at loggerheads with the WICB after alleging that he was cold-shouldered by the Board during a recent injury crisis, is yet to meet officials and sort out his differences.

“The WICB Management and the West Indies Team Management have not yet met with Chris Gayle and as such he has not been considered for selection for the 3rd ODI. The WICB and Gayle are currently working on settling a date for the meeting,” the Board stated.

Jamaican batsman Danza Hyatt has been brought in as replacement for Bravo, while pacer Kemar Roach has returned to the squad to replaces Rampaul.

The 28-year-old Hyatt has the experience of a mere two Twenty20s.

Roach, an out-and-out fast bowler, has been impressive in both Tests (40 wickets at 29.90) and one-day internationals (41 wickets at 23.95) but missed out on the Trinidad leg of the tour.

The squad for the fourth ODI will be announced on Sunday.

I wanted to quit on a high note: Murali