Pakistan's 25-year-old left-arm Kalim Sana, who was tonked or 50 runs in his four overs, proved to be the hero in the Super Over for Winnipeg as he gave away only nine runs, picking two wickets

Winnipeg Hawks beat Vancouver Knights to win the Global T20 Canada 2019 title in a Super Over thriller in Brampton, Ontario on Sunday.

After Winnipeg set a target of 193, riding on a 45-ball 90 from UAE’s Shaiman Anwar, Vancouver overcame a horror start to level the scores on the back of skipper Shoaib Malik‘s 36-ball 64 and Andre Russell’s 20-ball unbeaten 46 pushing the game to the one-over eliminator.

Pakistan’s 25-year-old left-arm Kalim Sana, who was tonked or 50 runs in his four overs, proved to be the hero in the Super Over for Winnipeg as he gave away only nine runs, picking two wickets. In reply, Winnipeg got home with two balls remaining – courtesy Chris Lynn’s winning hit to the boundary.

Earlier, after being put in to bat first, Winnipeg got off to a pacy start with Lynn and Anwar combining for a stand of 73 runs in the powerplay overs. Lynn departed for 37 off 21 balls to Russell on the final delivery of the sixth over, followed by the wicket of Sunny Sohal in the next over for 1, again to Russell.

The West Indies allrounder, who had not bowled throughout the tournament till the final, ended up with figures of 4/29 in his four overs, but not before Anwar’s pyrotechnics, that saw him notch up his third fifty of the tournament.

During his knock, the opener hit eight fours and seven sixes reaching the 50-run mark in 20 balls. His next 48 runs came in 24 balls. Anwar was ably supported by the eventual player of the series JP Duminy, who made 33 off 27 balls. But, a lower-order slump saw Vancouver restrict Winnipeg for a score of under 200. USA’s Ali Khan picked up 2/30 in his four overs.

In reply, Winnipeg skipper Riyad Emrit removed Vancouver openers Chadwick Walton (1) and Tobias Visse (0) in the second over of the chase, followed by the wickets of Daniel Sams (21) and South African international Rassie Van Der Dussen (23) by Dutch pacer Paul van Meekeren, to leave Vancouver reeling at 53/4 in the eighth over.

Malik then mounted a comeback with the help of Saad bin Zafar (27), with the duo adding 82 runs for the fifth wicket in quick time, before Malik was run-out by Hamza Tariq.

With 54 needed off 19 balls, Russell walked in and hit Emirt for two consecutive sixes followed by a a six and two fours off van Meekeren.

With 17 required off the final over – bowled by Sana, Russell managed two sixes, but could only run two off the final ball with Zafar run-out on an attempted third, that could have won the game.

In the Super Over, Sana was hit for a six first ball by Russell, but fell on the fourth delivery. Sana wrapped up the innings with the wicket of van der dussen – off a waist high full toss, not given no-ball by the umpires.

In reply, Russell missed his length and conceded four leg byes, followed by the winning runs – an outside edge to four – by Lynn as Winnipeg claimed the title. 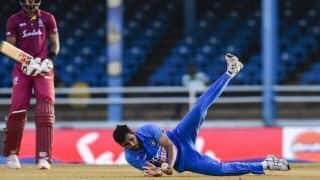 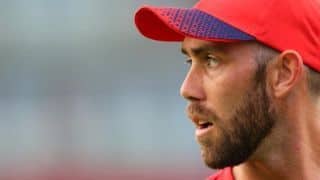