With victory in the second T20I at Hove, Australia lead England 12-2 in the Ashes.

Ellyse Perry has ticked off another milestone in her glittering career by becoming the first cricketer, male or female, to reach the milestone of 1000 runs and 100 wickets in T20Is.

The achievement came for Perry during Australia‘s seven-wicket win over England in the second T20I of the multi-format, points-based Women’s Ashes series at Hove on Sunday. Perry scored an unbeaten 47 off 39 balls as Australia chased a target of 122 with 13 deliveries left. Perry also took 1/17 with the ball.

With this win, Australia lead England 12-2 in the Ashes.

Ellyse Perry has gone where no player – male or female – has gone before her! #Ashes #WATCHME pic.twitter.com/knGLaVAH14

England were limited to 121/8 in their 20 overs after opting to bat, with Tammy Beaumont’s 39-ball 43 the top score. Only three others reached double-digits, Sophie Ecclestone and captain Heather Knight each getting 17.

Chasing 122, the Southern Stars were given a brisk start by Alyssa Healy who hit 20 off 13 balls, after which skipper Meg Lanning (42*) and Perry finished the job.

The series comes to an end with the third and final T20I in Bristol. 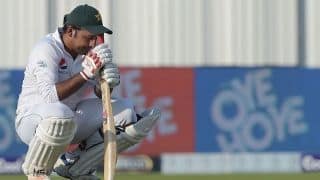