A draw in the only Test of the multi-format Women’s Ashes series in Taunton on Sunday has seen Australia retain the coveted prize.

After a century in Australia’s first inning, Ellyse Perry batted 64 overs on the fourth and final day to score 76 not out and give the Southern Stars an 8-2 points lead in the series with England. With a maximum of six points left from the three women’s T20Is that remain in the series, Australia have retained the Ashes.

Perry’s unbeaten 76 off 144 balls came after she scored 116 in Australia’s first innings.

England were left to play catch-up in Taunton after Perry helped Australia dominate day one. Heather Knight declared 24.1 overs into day four on 275/9, a deficit of 145 runs. In that time, England hit just 11 boundaries. Natalie Sciver made 88, dismissed 12 runs short of a first Test century.

Laura Marsh then dismissed Australia’s openers Alyssa Healy (13) and Rachael Haynes (1) in the first over after lunch on Sunday, but Perry stood up with another dogged innings to seal a draw.

Speaking to Sky Sports after the match, England’s head coach Mark Robinson said the team “missed a trick” on the first morning, which he felt cost them.

“We lost the toss which was probably the start of things going wrong in that sense,” Robinson said. “We just swam against the tide this game but I can’t fault the girls for their effort, they’ve given absolutely everything but sometimes you come up short. It’s a little bit the story of the series, we haven’t been able to settle quickly enough. Brunty [Katherine Brunt] was outstanding on that first morning but everyone else took a while.” 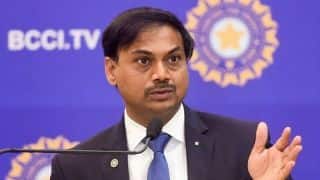 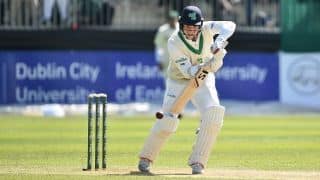