India Red had an excellent start to the Women’s T20 Challenger’s Trophy, beating India Blue by 7 wickets by VJD Method at Alur Cricket Stadium-III, riding on captain Deepti Sharma‘s outstanding all-round performance. Poor weather intervened with India Blue on 79 for 3 in 16.3 overs. At that stage they needed 22 with 21 balls in hand, with Sharma looking solid at the crease with a 45-ball 44. Giving Sharma company was Mona Meshram (14 in 21 balls).

Mansi Joshi struck early for India Blue, having Harleen Deol caught-behind for 7. Punam Raut went the same way, off Anuja Patil, while Radha Yadav bowled Disha Kasat. The three of them got only 14 between them, but that did not deter Sharma, who hit six fours in her innings.

Earlier, India Red restricted India Blue to 100 for 8 in 20 overs. Vanitha VR and Mithali Raj got off to a brisk start after Sharma opted to field. Vanitha hit a four and a six before holing out to Ekta Bisht off Shannti Kumari for a 10-ball 12. At that stage the score read 18 for 1 after 3.3 overs.

Raj then took charge of the innings, with D Hemalatha for company. Unfortunately, Hemalatha could not get going, struggling for her 25-ball 11. The top three batters were the only ones to reach double figures for them. Raj reached her fifty in 49 balls but fell two balls later, caught Tanusree Sarkar off Tanuja Kanwer for 51.

India Blue, 85 for 4 at that stage, still had 20 balls to go, but two run outs (one of them by Sharma) and a double blow from Sharma did not help their cause. They crawled to 100 for 8. 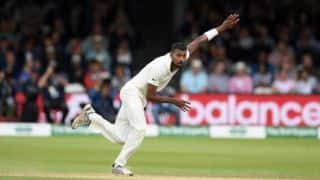