ICC has concluded its tour of the Caribbean after inspecting facilities at 11 match venues in eight countries for 2018 s Women s World T20 2018.

ST. JOHN S, Antigua: A team from the International Cricket Council (ICC) has concluded its tour of the Caribbean after inspecting facilities at 11 international match venues in eight countries for 2018 s ICC Women s World Twenty20 2018, which will take place from November 2 to 25. The venue inspection team, which included representatives of event operations, broadcast and media, also met with the officials of Cricket West Indies (CWI) in Antigua to discuss event objectives and targets. The CWI Management will now recommend the venues to its Board of Directors before submitting the venues to the ICC Board for ratification.

On behalf of the inspection team, I thank all the venues for not only their warm and friendly welcome, but also assisting us with a 360-degree inspection of the venues, said ICC s Senior Event Operations Manager, Simon Jelowitz. With the event now less than 12 months away, we have a very good understanding of how the venues operate, and what needs to be done to deliver an international event with a uniquely Caribbean flavor with the support of the CWI and the venues.”

He added: Though most of the venues, if not all, require some facelift and cosmetic changes, the main point we have emphasised on this visit is to ensure strong crowd attendances. This is consistent to our strategic objectives of maintaining the momentum from the ICC Women s World Cup 2017, where a packed-to-capacity Lord s watched England beat India by nine runs in a thrilling final.”

This is also a once-in-a-lifetime opportunity for the cricket passionate people of the region to back and support their side, which will defend the title, as well as watch the modern-day stars live in action in one tournament. According to the process, the CWI will now internally discuss the potential venues before recommending these to its Board of Directors for approval. The selected venues will then be presented to the ICC Board for ratification in February 2018.

We are grateful to all the venues for the time, effort and valued information they provided to the inspection team during their visit, said CWI Senior Project Officer Fawaz Baksh, who accompanied the venue inspection team, along with CWI Commercial Manager, Nelecia Yeates. The venue inspection ensures that stadia meet the minimum requirements to host matches and the response to the bid document which has been circulating will be the deciding factor on which country will host matches.

Baksh said: Next year s event will not only provide another global stage for female players to showcase their talent, but also for us in the Caribbean to present our countries to the World. But its success will depend on how well it is organized and how efficiently each venue can be managed, so now the work of CWI and ICC begins, as we evaluate the information from the inspections, make the choice of host venues and put the things in place that would get them geared up for hosting of the matches.

in India under the leadership of Stafanie Taylor. Other sides taking part will be: Australia, World 50-overs champions England, India, New Zealand, Pakistan, South Africa and Sri Lanka, all of whom have qualified directly. The remaining two sides will emerge from a qualifying tournament to be staged next June in the Netherlands. When the ICC World Twenty20 was staged seven years ago in the Caribbean, Australia won the women s title and England took the men s crown. 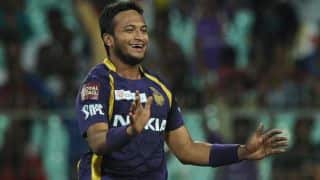