The ICC Women’s World T20 2018 is set to enter its knockout phase as the top four teams wrapped up final preparations for their semi-finals at the Sir Vivian Richards Stadium in Antigua on Thursday.

The upcoming fixtures will feature rematches of big-ticket games from the last two years; 16h00 local time on Thursday will see the hosts and defending champions the Windies take on Australia in a repeat of the final of the ICC Women s World T20 2016. On that occasion, the Windies scripted a famous win, becoming only the fourth team to win a world title since 1973.

Then, India will face England as the lights take full effect, a repeat of the nail-biting final the two played out in the ICC Women s World Cup last year. England won that tournament after a tumultuous year, while India narrowly missed a first world title.

The evening promises excellent cricket and a great atmosphere, with the 12,500 capacity Sir Vivian Richards Stadium nearly sold-out. Before the big night, the four captains spoke to the media.

“Coming up against the West Indies, we know they’re a very dangerous team, and in a World Cup it is always very difficult to win semi-finals. It’s a new game tomorrow. We’re really excited about the opportunity that we’ve got to play in a World Cup semifinal in front of a really big crowd.

“We were speaking earlier today about just really embracing that opportunity. You don’t get to come back here very often, so we’re just really looking forward to the opportunity to come up against a good team and hopefully put on a good show.”

“We do look at the team we’re going to face; we played India in a warm-up game earlier in the trip. And we’ve seen the tactics they’re using. They’ve been very effective taking pace off the ball. So we’ll also look into that and decide how we’re going to go about playing it and how we are going to have our method to score runs.

I think we’ve had some really good experience from crunch games. Obviously that game against South Africa (in this tournament), we knew pretty much was a must-win game straightaway; the second game in the tournament, and it was straight into crunch time. And obviously that World Cup last year found us in great stead in terms of (how) we won quite scrappy games we probably shouldn’t have won.

When we were coming here no one was sure that we could qualify for the semis. I think the credit goes to all team members and support staff that we worked hard in the last couple of months. It’s just because of their hard work we have reached here.

I think the self-belief is different, I can give credit to Ramesh (Powar, coach) because since the time he joined our team our mindset and approach has totally changed. And I think now we have better plans and we can think bigger. Total credit goes to him.

Well, five months ago, I’m not sure anyone or a lot of people (in the West Indies) would know about women’s cricket, and to see that amount of people coming to the game is elating, and I’m sure the players are elated, as well. I hope that it continues, so not just for tomorrow, but it continues for a longer time 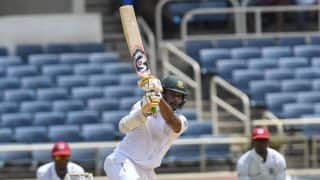