Deandra Dottin produced the third-best bowling figures by a woman in T20Is as the home team defended a low total and beat Bangladesh by 60 runs.

West Indies fast bowler Deandra Dottin produced the third-best bowling figures by a woman in T20Is as the home team defended a low total and beat Bangladesh by 60 runs in the third match of the ICC Women’s World T20 on Saturday. Dottin’s five wickets for five runs rolled over Bangladesh for 46, pulling West Indies out of a hole that was dug by their batters, who could muster just 106 for 8 in 20 overs.

Dottin was handed the ball in the ninth over, when Bangladesh were already three down for 29 with openers Shamima Sultana and Ayasha Rahman, along with the No. 3 batter Jahanara Alam were taken care of by Shakera Selman and Stefanie Taylor. Two deliveries is all it took Dottin to get in action. Fargana Hoque offered Dottin a caught and bowled, and two balls later, the fast bowler cleaned up Nigar Sultana with an inswinger.

Her second over was no different. Ruman Ahmed and Lata Mondal departed in three balls to leave Bangladesh at 7 for 35. That was all she wrote. Dottin returned to remove Salma Khatun for her fifth wicket – four of her five dismissals were bowled – to produce the best haul by a West Indies woman in T20s. No Bangladesh batter could even enter double-digit score, and their total of 46 was Bangladesh’s third lowest-total on women’s T20Is, after 30 and 44, both of which came against Pakistan.

Had it not been for Dottin, West Indies wouldn’t have found their target of 106 easy to defend. They were average with the bat themselves. Jahanara Alam had them reduced to 14 for 2 in the third over, and Ruman Ahmed wicked up two wickets in the middle order. But the difference between Bangladesh and West Indies was two vital innings – Taylor’s 44-ball 29 and a counter-attacking 32 off 24 balls from Kycia Knight. From 50 for 5, Taylor and Knight added 37 runs for the sixth wicket.

Taylor finally perished for 29 but West Indies were able to squeeze out 28 runs in the final three overs, allowing them to cross the 100-run mark. 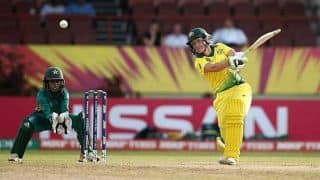