Only West Indies' offspinner Anisa Mohammed with 146 has more in Women's T20Is.

Ellyse Perry claimed her 100th wicket in T20Is to become the second female cricketer to the landmark, as Australia Women sealed a fourth Women’s World T20 final title by beating England Women by eight wickets at the Sir Vivian Richards Stadium in Antigua on Saturday.

The 28-year-old allrounder became the first Australian to take 100 T20I wickets, and the second after West Indies’ Anisa Mohammed, when she won an lbw shout against Natalia Sciver during England’s innings of 105. The milestone came in Perry’s 102nd match.

With her lbw dismissal of Nat Sciver, @EllysePerry becomes just the second player in history to join the 100 T20I wicket club, behind Anisa Mohammed of the West Indies (113) – and you’d think there are plenty more to come from the Aussie gun! #WT20 #WIvAUS #WatchThis pic.twitter.com/lBb41LOAuP

Sciver reviewed the lbw decision against Perry immediately but the third umpire said that there was no bat involved and the ball-tracking showed it crashing into the stumps. The decision did not go down well with Sciver, who threw her hands up in confusion.

Chasing 106, Australia won in 15.1 overs to get their hands on a fourth Women’s World T20 trophy. 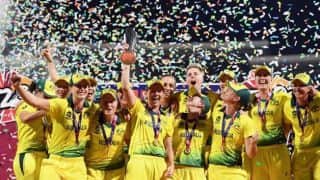 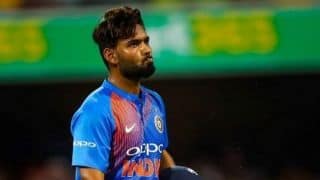