The two teams were greeted with empty stands as they walked out for the anthems.

While all the buzz has been about the India–Sri Lanka final at the ICC World T20 2014, England women and Australia women are also playing their title clash at the Sher-E-Bangla National Stadium, a few hours before the men’s final.

However, the two teams were greeted with empty stands as they walked out for the anthems before the game. All the fanfare, seems to be reserved for the men’s contest later today.

Both the women’s semi-finals preceded the men’s games earlier this week and one saw similar scenes in the stands. There was hardly anybody in the east stand, the most vocal part when it is full. One could only see some crowd in the West Stand behind the player’s dug-out.

Some of the family members of the Australian players were there in the ICC Hospitality Area in the North Stand, waving their flag. Mitchell Starc, the Australian left-arm pacer is also present in the crowd. His girlfriend, Alyssa Healy is Australia’s wicketkeeper for the game. 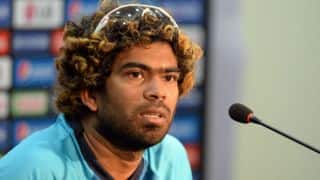 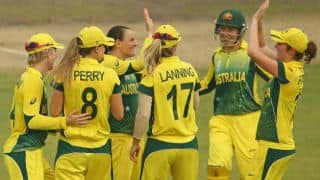