World Cup preview: A Canadian win over Lanka seems as likely as a heist in Fort Knox!

World Cup preview: A Canadian win over Lanka seems as likely as a heist in Fort Knox!

Sri Lanka begins their World Cup campaign on the second day of the tournament with a meeting against Canada at the newly-built Mahinda Rajapaksha International Cricket Stadium, Sooriyawewa in Hambantota Sri Lanka will play their first match in 2011 World Cup against Canada on Feb 20.

Sri Lanka begins their World Cup campaign on the second day of the tournament with a meeting against Canada at the newly-built Mahinda Rajapaksha International Cricket Stadium, Sooriyawewa in Hambantota. And given the manner in which the two sides have played in the warm-ups so far, it would be safe to assume that this would be another of the practice games for Sri Lanka.

It would be a rather cocky if the Lankans go into the game with that thought. After all, it is a team which has been tipped to go on to win the World Cup, and complacency is the one characteristic they could do without.
Sri Lanka’s results in the lead-up to this game have been nothing short of extraordinary, that culminated into a first-ever series win against Australia late last year. The 2-0 win over West Indies in an ill-planned series before the World Cup and the two warm-up games victories will put them as strong favourites to win this one.

For long, Sri Lanka depended heavily on the top three, with Upul Tharanga  joining in as the fourth, consistent batsman and a partner to the buccaneering Tillakaratne Dilshan. Thilan Samaraweera’s good form in the lead-up will reduce that pressure on the top-order that also consists of the captain Kumar Sangakkara and former skipper Mahela Jayawardene.

Where Sri Lanka score over most other opponents is with their bowling, their more under-rated aspect of ODI cricket. However, with the likes of Lasith Malinga, Muthiah Muralitharan and Ajantha Mendis on their bowling roll, it is a surprise that they haven’t got more attention than they actually have.

On paper, it is probably the best in the competition and that puts them as favourite for not only this game, but also for the competition. With coach Trevor Bayliss having sounded out that the side will go with a 7-4 combination, the think-tank will be left with the rather arduous task of filtering it down to four bowlers – apart from Angelo Matthews, who will feature as their all-rounder. Malinga and Murali are sureties; the remaining players will require much more thinking.

Despite Canada’s obvious worries with their batting – they had scores of 152 for six, 105 and 112 leading up to the England game – their hopes would have been raised by Rizwan Cheema’s swashbuckling knock against England. Even in that game, Canada had collapsed to 27 for five and an early finish to the game seemed likely. Cheema’s 71-ball 93 pushed them to 227.

Hitherto, the Canadian batting looked up to John Davison to deliver the goods and his failures coincided with his team’s. Cheema’s innings could act as a beacon of hope for the future.

It will be a different experience altogether though, for the Canadian players, having never faced up to good-quality spin bowling under conditions which would be a far cry from those they have encountered in their careers. An upset would probably be the farthest from their minds. Instead, it will be a matter of battling both, the conditions and the opposition and giving it their best shot.

As things stand, a Canadian win seems as likely as a Fort Knox heist! 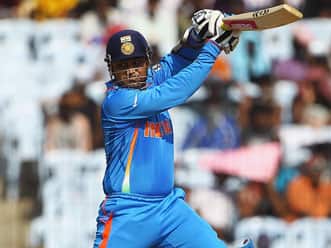