Sourav Ganguly once admitted on air that his fellow state-mate Wriddhiman Saha is too quiet.

MS Dhoni’s void was difficult to fill. Wriddhiman Saha successfully fitted into the massive vacancy left by Dhoni as India’s wicketkeeper-batsman in Tests. Virat Kohli has been vocal on Saha’s importance in the Indian Test side. Kohli and Saha may share a good camaraderie, but there seems little similarity in their approach. While Kohli never shies away from giving a piece of his mind to the opponents, Saha admits that he has never sledged. In fact, he believes doings things like his predecessor Dhoni did.

Sourav Ganguly once admitted on air that his fellow state-mate is too quiet. The Bengal stumper, unlike his current captain or like his state’s Dada, does not believe in the art of sledging. In an interview with The Quint, Saha said, “I personally don t believe that sledging is important and I don t remember sledging ever. You see, even MS Dhoni never sledged.”

Saha believes the tactic works only when batsmen get intimidated, and a few thrive on it.

“But if done correctly, it can produce effective results. While a few batsmen get intimidated, others thrive on it and play even better. Sledging doesn t work on everyone unless you know each batsman s reaction,” he added.

Saha is rated amongst the best wicketkeepers in the world. But keeping wickets to Ravichandran Ashwin on Indian tracks can be a tough task. Saha had earlier admitted that keeping against Ashwin is the toughest among all spinners.

“Although a wicketkeeper has to always be alert, Ashwin s bowling requires added alertness. He rates the batsmen and accordingly applies different variations. He doesn t bowl in the same pattern, which requires me to be extra cautious,” he added.

The Delhi pollution forced Sri Lankan cricketers to put on a mask, and there were frequent stoppages on Day Two of the third Test. While some have been overtly critical of Sri Lanka’s approach, they also were heavily criticised. However, Saha, who was at the crease when Kohli was forced to declare the first innings, looks at Sri Lanka’s side of things.

“Given the hazardous pollution levels in the Indian capital, it was natural for all of us to feel a tad uncomfortable. However, I do not think that the frequent match interruptions, or calling off the game, was needed. Our intention was to win the match but perhaps the issue was blown out of proportion. But looking at it from another angle, the Sri Lankans come from a country where the air is much cleaner, so it could have been difficult for them,” the 33-year-old said.

As the wicketkeeper, Kohli does rely a lot on Saha for reviews. Like Dhoni in limited-overs, does Kohli also rely on strategic inputs from Saha? Saha cleared the myth that all on-field decisions are not taken by the captain before going on to hail his captain.

“It is often mistaken that the captain takes all the important decisions. Not just me, Virat asks everyone for their inputs. We all give solutions and ultimately whatever seems best for the team is applied. This is a standout trait of Virat s captaincy. His aggression and hunger to win is just amazing. Also, how he backs us during press conferences even when we fail to perform is very motivating,” Saha further added.

He also said that India are not really making any special preparations for the South Africa tour and also announced that his goal is to represent India across formats. 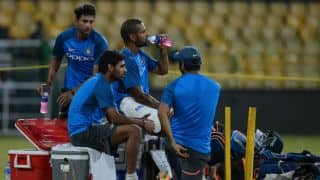 Shikhar Dhawan down with fever ahead of India-Sri Lanka ODI at Dharamsala; Kedar Jadhav already ruled out 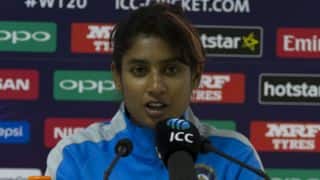